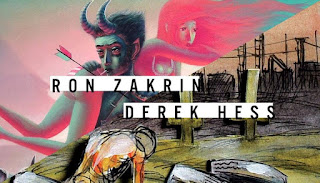 Opening Friday, April 28th Derek Hess returns to Inner State Gallery to showcase an entirely new body of work titled EDP. With a collection of new paintings, drawings, mixed media 8-tracks and three-dimensional works on cardboard, the Cleveland-based artist continues to create emotion and depth through bold lines and form with new works that epitomizes his unique and recognizable style known the world over.

Joining Hess at Inner State will be Detroit’s own Ron Zakrin, whose new body of work Exiles continues to evolve Zakrin’s massive body of work with an ever growing cast of mythical beings and social pariahs reimagined in a modern context.

Both shows are free and open to the public with an artist reception from
7-10pm on Friday, April 28th, 2017

Executed primarily with pen and ink, much of Hess’ work for EDP depicts dynamic figures and angelic characters in adverse situations. Showcasing Hess’ strong technical skills and compassionate feel of his craft, these new works allow the artist to give fans a glimpse into his own personal struggles.

“EDP is a term used by law enforcement when referring to an ‘emotionally disturbed person.’ As someone who deals with the dual diagnosis of bipolar and alcoholism these issues tend to be subjects of my work, or more precisely the feelings they create,” Hess said from his Cleveland studio.

For Hess’ second solo exhibition at Inner State casual fans and longtime collectors alike are both sure to be surprised by this entirely new collection which features Hess’ first fully refined works created with three-dimensional cardboard assemblage. These new layered works bring viewers one step closer into Hess’ unique world.

“I was drawing on cardboard one day, but I didn’t like the background of a piece, so the idea came to me, why don’t I just cut the foreground figure out, redraw the background on another piece of board, and adhere the figure on top of it? There it was. A figure coming out of the piece and creating nice cast shadows at the same time. I then began pushing the layer numbers creating all sorts of backgrounds, middle grounds and foregrounds,” Hess added.

Bringing new work of his own, Detroit artist Ron Zakrin captures the outcasts, loners and beings that do not fit in with society with new paintings created in the heart of the city. Although a sense of isolation permeates the series, Zakrin’s portrayals are filled with undertones of beauty, motion and humor.

“For this exhibition I will not only be showing new figurative works -- an angel hitchhiking, Satyrs burning cities to the ground, fauns in lingerie, you get the idea -- but there will be a few of my new paintings on tar paper which, unlike my previous works on tarpaper, undergo a surface preparation resulting in a surface quality unlike anything else,” Ron Zakrin said from his studio in Detroit’s Historic Eastern Market District. “I have also been revisiting techniques that have not been exhibited in quite some time so there will definitely be a surprise or two,” Zakrin added.

See the entire line of paintings for the show via 1xRUN here.
Posted up by RebeccaMich on 28.4.17