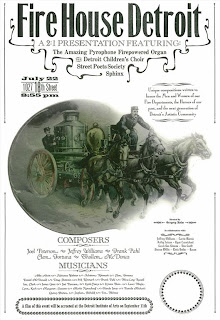 FIRE HOUSE DETROIT
We represent an artist's group called 2:1. We are the artists responsible
for last
year's Ice House Detroit; an architectural installation that provided a
beacon of
dialogue regarding the housing crises. We are currently working on a project
called Firehouse Detroit. This is the second in an ongoing series of Detroit
specific
projects and is staged as an homage and tribute to Detroit's citizens, its
firefighters,
and its talented young people.

The Firehouse Detroit Project is spread over several dates and includes five
exciting events. On July 22nd we are staging a live, filmed performance at
one of
Detroit's beautiful and historic de-commissioned fire houses. This
performance
will feature the Detroit Children's Choir under the direction of Carol
Schoch,
members of the Street Poets Society under the direction of Peace Project
founder,
Al Taylor, the Detroit Fire Department's Honor Guard, and some of Detroit's
finest
composers and musicians.

On August 6th, we are hosting an Arise Detroit Neighborhood's Day event that
will
be held on the grounds of the firehouse. The event will feature sound art
installations and a special musical instrument building seminar in which 100
children will take home the musical instruments they have made.

Then, on the weekend of September 11th which marks the 10th anniversary of
the
events of 9/11, we will hold two simultaneous events. A commemorative film
that
is produced from the July 22nd performance will be shown at the Detroit
Institute
of Arts Film Theater with live performances by the Detroit Fire Department
Honor
Guard and The Detroit Children's Choir. Meanwhile, our historic firehouse
will be
converted into a temporary museum that will showcase over 100 years of
firefighter memorabilia.

Finally, on 11.11.11, we will stage a related performance at the grand
reopening
event for Cranbrook Museum.

We're very excited to be partnering with a number of organizations and
community groups here in Detroit to create projects that showcase the
talents of
Detroiters and foster the development of creativity and community awareness
in
Detroit's children.