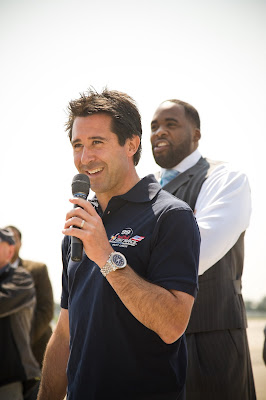 MOTORCITYBLOG will have a few pairs of passes to giveaway for this killer event soon and will be on the ground talking to spectators and interviewing the Red Bull Pilots!

In the meantime check out the press release from todays announcement and go get your tickets online - this is a must see event for sure!

On May 31 and June 1, twelve of the world’s best pilotsincluding three Americans will introduce the Midwest to a new dimension inmotorsport.

The pilots will pull up to 10 Gs with unprecedented skill andprecision in their high-performance race planes just feet above the DetroitRiver in a captivating race against the clock.The Detroit race will follow the first U.S. stop of 2008 in San Diego onMay 3 and 4.

The2008 season opener took place in Abu Dhabi, UAE on April 10 and 11 whereBritish racer Paul Bonhomme brought a first-place finish back to GreatBritain.

“We thank you, Red Bull Air Race, for bringing the World Series right here to Detroit,” stated Detroit Mayor Kwame Kilpatrick at the official launch of the race today at the Detroit City Airport.

“We said this to the Super Bowl, to the NCAA, the best race that you will have in your entire series will be the race in the city of Detroit.” The race will be a ticketed event along downtown Detroit's five-mile long, spectacular riverfront. This Detroit landmark is being revitalized by public and private donations, including a significant investment by General Motors in its waterfront.

Each race will comprise two days of competition: Qualifying Day and RaceDay. The overall series points leader will be crowned Red Bull Air RaceWorld Champion after the season finale in Perth, Australia in November.

In the Red Bull Air Race, the world’s best pilots race at speeds reaching 260mph, enduring forces of up to 10 Gs as they navigate a low-level, aerialrace track made of air-filled pylons.In 2007, more than 400 million viewers watched the races on televisionworldwide.
In the United States, each race will be broadcast on Sunday evenings on Fox Sports Network starting in July.