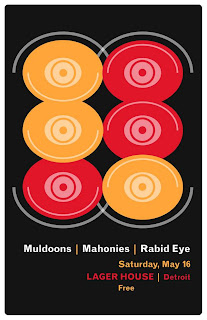 The Mahonies w/The Muldoons, Rabid Eye
Saturday, May 16th 2009
10pm
PJs Lager House
Corktown Detroit MI
MCB sent off a few short questions to Ben and Zach
from Rabid Eye about the band
We got back a few short answers that should help you make up your mind about going to check out one of Detroit's newest bands
- have look below!
MCB: Guys - who are the band members?
Ben: Zack and I
Zack: with others joining us on stage
MCB: When did you first start playing and where?
Ben: The basement of a Woodbridge house.
Zack: We play in a band together,
and wanted to play in another band together.
MCB: What was the band name was derived from ??
Zack: a song I heard
MCB: Is this considered a side project
or something more significant?
RE: Significant side project
MCB: How would you describe RE sound ?
RE: Stoner-jams by unstoned people
MCB: Do you think differently as
your playing with RE versus readies?
Ben: Yes
Zack: Yeah, so do I
oh - we forgot to ask them when they were playing next so keep your eyes open for Rabid Eye playing after saturday real soon.
there you have it - all the answers you need
go check out Rabid Eye this Saturday night at PJLH
The Mahonies are a kickass two-piece drums-and-guitar band, with Craig Brown from the Terrible Twos on the beat.

The Muldoons are everyone's favorite rock'n'roll kids with dad, Brian, on drums. They're better, more talented and more passionate about music every damn time you see them so make it out to this show where they are sure to be in top form!

This is a FREE SHOW and a guaranteed good time.

"MCB IS DETROIT"
Check out more MCB-VIDEOs here
Posted up by DIETROIT on 15.5.09