TOMORROW: Kids in the Hall @ ROMT 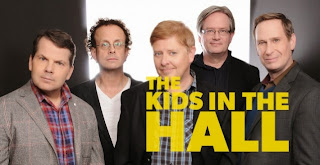 A five-man sketch comedy troupe, “KITH” was formed in 1984 when members Foley and McDonald joined forces with members McCulloch and McKinney. Prior to joining “KITH”, McCulloch and McKinney had been performing sketch comedy as part of the Loose Moose Theater Company and with a troupe called “The Audience” in Calgary, Alberta, Canada. McCulloch and McKinney moved to Toronto in 1984 and joined Foley and McDonald in “KITH”, and the troupe performed at various comedy venues throughout the greater Toronto area (most notably, a venue called The Rivoli) for several years. Thompson, a university theater student, later joined the troupe after having been a member of the audience for several of their earliest performances.

This is where I was going to post my "favorite" KITH sketch, but after being sucked down a great gaping YouTube hole, I had to admit there is no one favorite. So let's go with one that everyone can relate to.