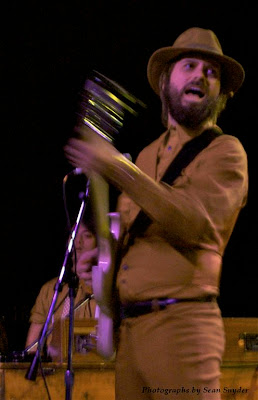 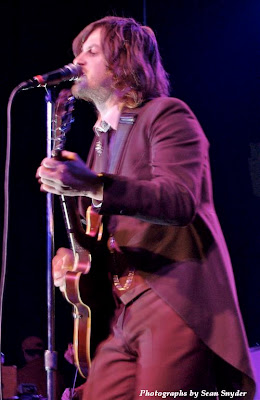 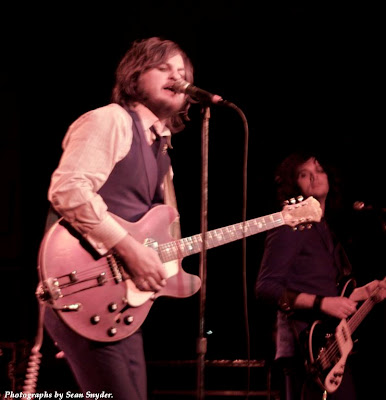 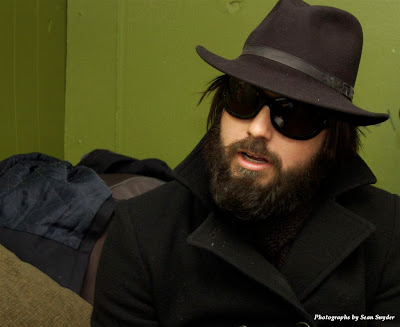 “I very nearly had to wait”. – King Louis XIV

Louis XIV Kicks Royal Rock Ass at The Majestic
They’re back with a new album, but which king would win in a fight:
Louis XIV or Franz Ferdinand?

Louis XIV rolled into Detroit with The Editors and Hot Hot Heat for a show at The Majestic and I waited over an hour to chat with guitarist Brian Karscig, aka Brian XIV. Their tour manager was still on Chicago time when he asked me to arrive during soundcheck. But that’s life on the road. It’s like that sometimes.

Brian and I chat backstage in a cold, tiny dressing room. He’s bundled in a black Peabody coat, fedora and a thick scarf. He rubs his hands together to warm them. The only real heat in the place at 4 pm is Hot Hot Heat. We hear them in the background during soundcheck.

Louis XIV puts the Mick Jagger swagger back into the indie rock mix. With their supercharged sex lyrics, plucky, jumped-up guitar lines, melodic vocals and attitude to match, the band is in town to kick some royal rock ass on the eve of the release of their new album Slick Dogs and Ponies.

On the new album, the band uses strong guitar parts, orchestral arrangements and songs that are intricately woven to create an original work from beginning to end. Air Traffic Control tips its hat to Bowie and the Spiders From Mars with its sweeping orchestral soundscapes while tracks like Guilt By Association get down-on-the-floor dirty with frantic guitar lines and hints of harpsichord.

“We made seven different records and I don’t know if we could do that again,” Brian says. “I think we made an album we can never duplicate. It’s not for good or for bad. I just don’t think we could make it again.”

In the end, the band recorded 63 tracks at their studio in San Diego. Eleven made the album, eight were released as B-sides and four landed on an EP released on September 11. The band went a little mental in the studio. They had to go to the edge to jump off and land in the lake.

“Once you start to think about music, it starts to suck,” Brian explains. “We had to stop thinking about other peoples expectations and just kind of do what we wanted to do.”

Meanwhile, the stage on the other side of the dressing room door goes silent as Hot Hot Heat finishes their soundcheck and our conversation drifts into Paris and King Louis XIV. One of the guys in Hot Hot Heat opens the door.

“Oh, sorry,” he says as he ducks out again. “Don’t get Brian started about Franz Ferdinand.”

So, who would win in a fight? Louis XIV or Franz Ferdinand?

And they are. The band loved Paris so much that they wrote their entire first album there. In two weeks.

“We wanted to get out of our hometown (San Diego). We had a free place to stay in Paris and wanted to find some inspiration. That’s kind of how it started.”

So the band put their gear on a plane and set up shop in the historic Latin Quarter of Paris. They recorded eleven songs. They self-released a namesake EP, passed out free MP3s, caught the attention of Atlantic Records and ten of the Paris tracks went on to become The Best Little Secrets Are Kept, their debut CD. They would later share stages with The Killers, The White Stripes, The Pixies and do a couple of festival dates with The Von Bondies.

We’re still talking about Paris when the tour manager cracks the door. They need him on stage for soundcheck in a couple of minutes.

So, is there any truth to the rumor about the 15-minute impromptu set in the parking lot of the old Gold Dollar with The Von Bondies later tonight?

Brian thinks it over. He’s not sure. I’ve asked him a fake question about a place that doesn’t exist anymore.

“Yes!” he says with a big dose of conviction.

I tell him I’m not sure either. I’m kidding him. He laughs.

“It was great to meet you,” he says as he stands up.

Brian and Louis XIV went on to play for a packed house at The Majestic.
The new album drops today.
Test-drive it at www.myspace.com/louisxiv
Photographs by Sean Snyder
Posted up by DIETROIT on 29.1.08