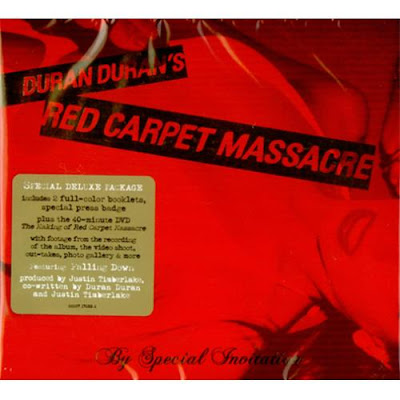 1 lucky reader won tickets to the show 2 weeks ago and will be writing an extensive review of the show - thanks Mr. Winner!

As for you - get on over to the Masonic tonight and enjoy the boys from DD - the show starts at 7:30pm which gives you plenty of time to swing by the majestic for --X-- and The Detroit Cobras (MCB onsite for this one as well kids)

Fresh from their Chicago gig, Duran Duran have yet again left a swath of glamour over the assembled throngs, a feat they seem to have mastered over thirty years of performance, imagery, music and taste.

As a thirty something year old fan, I am well schooled in the oeuvre of Duran, thus please allow a quick primer…
It was 1983 when we American kids were pounded over the head with the fedoras, the wrist bands, the smokey eye makeup. The songs folded in and out of our common experiences and ten years later they were doing it again, for Generation Y. Ten years on from that (after the comings and goings of members at random intervals) and the men that gave us “…cherry ice cream smile” were smiling BIG on a world tour that reunited the original members and launched a pop campaign nothing short of miraculous… for the fans that is. Sales were pleasing enough but it was the core fans who dropped jaws when the Simon/Nick/John/Andy/Roger train left the station.

Here we are in 2008 and on the heels of the unfolding drama they’re calling “Red Carpet Massacre”, the Epic release from late 2007 that has roped in the quickly widening age range of fans but perhaps not so much the charts.
Slumping sales of said product made no difference on Thursday evening though -
never before have so many suburban parents looked so fierce.

Typing with the hangover of a Night in the D (double meaning intended) , my memory unfolds for you now… we tied a few on with Vanessa and Holly (of groupie stardom) and sidled into the Masonic Temple Theater. This venue is a cavernous and historic building replete with old Detroit glitz where a not-quite-so-full house rose to it’s feet at 8:48pm and did not sit down ‘till 11:00.
A well rehearsed line up marred only briefly by a few technical hiccups allowed for an evening of “singing-at-the-top-of-your-lungs” joy.
Heaven indeed for those willing to submit.

The show was (as Duranies have come to expect) a mash of hits peppered with the new songs and a quirky “electro set” poised neatly in the middle and featuring five basic elements: the tear jerker oldie, the rager, the throw down, the cover version and the “what the heck was THAT?” (“Skin Trade” in overdrive). It was tight, sharp and well executed.
With a back catalogue that extends beyond our years in elementary school, they had plenty to pick from.

All of the elements were in place (purists might miss guitarist Andy Taylor but the capable Dom Brown is the perfect replacement) and the overall sound was bigger and grittier than ever.
Nate “Danja” Hills has added a new ingredient to the mix, one that smears the band’s sound in street-techno-candy-gloss and grinds it through the rock-sieve.
The feel of their new c.d. translated nicely into live performance and for once in many moons I saw fans actually dancing with abandon to the NEW songs.
This is odd as it’s normally a polite sit-down for the new material and back to booty shake for something like “Reflex” or “Notorious” but not so on this night - the new stuff felt immediately current and in step with the modern pop definition.

Their set (the stage itself) had a cityscape backdrop and mini “red carpet”, cute but mainly sparse. The light show incorporated massive rectangles of fluttering light that gave emphasis to certain choruses or phrasing, designer Vince Foster knows what he’s doing. I can’t say I loved the twinkling Christmas lights strung from the rafters but what do I know?
There was none of the video projection techniques Duranies have come to adore but perhaps the Temple was ill-suited… it made no difference in the long run, the music was all we needed.
An interesting opening sequence involved searchlights combing the crowd, making US feel famous for minutes at a time and driving the excitement to fever-pitch.

The band? Let’s run the numbers…
The guys themselves seemed genuinely pleased to be back in Detroit and the between song banter was enough to convince us of being a favorite stop for them.
Simon LeBon (lead singer), approaching 50 at breakneck speed, still cannot dance but literally sounded better than he has in a decade. Honestly, I couldn’t catch even one sour note - which is something Duranies get a kick out of catching.

The glorious Anna Ross served as backup vocalist and lent a clean and exacting twin sound to Simon’s masterful tone. Saxophonist Simon Willescroft was perfect on standby for the ever present solo/riff that bubbles to the surface in so many Duran songs.
John Taylor of course remains the quintessential bassist and fan favorite by casually engaging the audience with wry smiles and witty commentary and - oh my - an Obama tee for the encore? Political.
Roger Taylor (drummer) stays hidden behind his Tama/Zildjian fortress but packs a sonic punch and solo’s himself into a storm during the “meet-the-band” segment of a now legendary “Girls On Film”.
Nick Rhodes (keyboardist) is nothing short of Pop Celebrity at full tilt. His famed riffs and not-too-hard-to-miss improvs laid an aural glitter over the set that gave their vibration a glam-sheen (thank you Korg) and a powerful sound. I’ll stop short of discussing the eerie glow of the Mac Apple laptop peering out from his perch.

It was a long show, a set list that held the audience with anxious “what will they play next?”-ness. The people around us (only a smattering of “under 18”) swayed and shimmied and sang the songs that defined their formative years and “Save A Prayer” delivered the expected churchiness of “link arms and hold up yer’ cell” we’ve all seen in the docs and vids that seem to be an endless stream of footage from years recent and long gone. I can only hope documentary video artist Gavin Elder caught chunks of this particular show. Detroit loves to dress up, loves a good night out and apparently knows ALL the words to “Rio”. The encore had us nearing exhaustion and looking around at the sweaty faces and clapping hands and giant smiles it became evident that Detroit loves something else as well.
Detroit loves Duran Duran.

Um, but don’t say that to the X fans we ran into at the Majestic later on
- over and out, Dave LaFave
Posted up by DIETROIT on 15.5.08