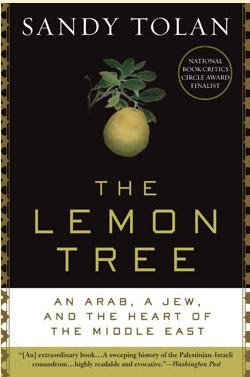 Journalist, teacher and public radio producer Sandy Tolan will appear at the Arab American National Museum at 7:30 p.m. Saturday, May 17th 2008 to give a lecture and read from his book The Lemon Tree: An Arab, A Jew and the Heart of the Middle East (Bloomsbury, 2006).

The Lemon Tree chronicles the lives of two families – one Israeli, one Palestinian – who both occupied the same stone house in Ramle, while telling the larger story of the Palestinian Nakba (catastrophe) and the 1948 creation of the state of Israel.

During the lecture, Tolan will explore the 60th anniversary of that fateful event, share some of its untold history and discuss its contemporary impact. Following the lecture, Tolan will take questions from the audience and sign copies of his book, available for sale in the Museum Store. Attendees are welcome to bring their personal copies of Tolan’s book to the event.

The lecture in the AANM Auditorium is free and open to the public; RSVP to Fay Saad at 313.624.0200 or fsaad@accesscommunity.org.

Sandy Tolan is a teacher and radio documentary producer. He is the author of two books: Me and Hank: A Boy and His Hero, Twenty-Five Years Later (Free Press, 2000), about the intersection between race, sports, and American heroes; and The Lemon Tree: An Arab, A Jew, and the Heart of the Middle East. The Washington Post called the latter book “extraordinary” and placed it among its top nonfiction titles for 2006; the Christian Science Monitor wrote, “no novel could be more compelling” and proclaimed, “It will be one of the best nonfiction books you will read this year.”

Tolan has reported from more than 30 countries, especially in the Middle East, Latin America, the Balkans, and Eastern Europe. As co-founder of Homelands Productions, he has produced hundreds of documentaries and features for public radio. He has written for more than 40 newspapers and magazines.

From 2000-2007 Tolan taught international reporting and radio at the Graduate School of Journalism at the University of California-Berkeley. In 2007, his students won the George Polk Award for their public radio series on the early signs of climate change around the world – the first time students have been honored in the 58-year history of the awards. He is currently a visiting professor at the Annenberg School of Communication, University of Southern California.

The Arab American National Museum is a proud Affiliate of the Smithsonian Institution in Washington, D.C. Read about the Affiliations program at http://affiliations.si.edu.