Detroit post-grunge rockers Fifth Way celebrate the release of their new CD “No Boundaries” at the Magic Bag Theater on Saturday, January 30. Doors are at 8:00 p.m, tickets are $8 and ages 18 and over are welcome to attend. Local bands Core Effect, Forest Wade, and The Wall Clocks open the show. 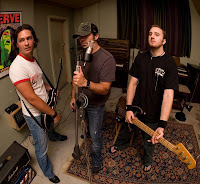 Recorded at Royal Oak’s Rustbelt Studios, Fifth Way’s “No Boundaries” features 11 blazing tracks of melodic guitar rock. The disc “is an attempt to bring back rock to its purest form – with fierce lead vocals, potent guitar riffs, fueled by a full throttle rhythm section,” explains Fifth Way lead guitarist Zak. “We all came of age in the 90s, listening to Pearl Jam, Nirvana, Alice in Chains and Soundgarden, and while you can definitely hear those influences, we’ve managed to create our own – very current – sound.”

And Fifth Way’s sound is one rock fans are responding to. Detroit’s WRIF has already started spinning “No Boundaries” first single “Stomping Ground,” a forceful rock anthem that is at home alongside any Nickelback or Disturbed hit. The new CD will be available for sale for the first time at the Magic Bag celebration.

Honing their performance skills as openers for Saliva, Alter Bridge, and Bret Michaels, Fifth Way brings an arena-worthy live show to every stage they grace. With pumped up exuberance, shredding, riff-heavy guitars, and knock ‘em down grooves, the band exudes an energy and excitement that more then satisfies even notoriously discerning Detroit audiences. For the five members of Fifth Way – who live and embrace “a way of life expressed through music,” the Fifth Way – is the only way to rock!

Advance tickets are available now at the Magic Bag box office or online at Ticketmaster.com. The Magic Bag Theatre is located at 22920 Woodward Ave., in downtown Ferndale. For more information about the show please contact the venue at 248-544-3030 or themagicbag.com