If you were one of the lucky ones who got a fat MCB holiday gift basket then be sure to dig out the Mexican Knives CD and give it a listen...the local 4 piece led by Zach Weedon has been touring out east the past few months and are picking up some steam and getting many writeups and recognition including this review from Impose Magazine 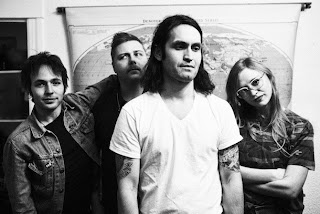 I have been listening to the split single a few weeks now after meeting up with Zach who was donating a handful of the CDs for our holiday baskets.  We talked about the east coast touring and he was impressed with the turnouts at shows and hopeful for a good things in 2013.

Speaking of good things in 2013, the next time you can catch Mexican Knives here in town will be when they play our upcoming fundraiser show for Michigan Humane Society

Hit us up for a hardcopy from Mexican Knives and while we are at it (since its the holiday season) we will pay your way into the show +1 - motorcityblog@earthlink.net