SHOW REVIEW and INTERVIEW: DOYLE at the Token Lounge in Westland

The Misfits put the "Punk" in Rock just as much as The Beatles put the "Rock" in Roll. Even so both bands ended up breaking up before their time, the legacy and impact they have left behind on the music genre is everlasting. Last week Motorcityblog had the pleasure to catch the band DOYLE featuring legendary Misfits member Doyle Wolfgang von Frankenstein on guitar as they were plowing through their 2015 Abominator tour.

The band is touring behind their 2013 album "Abominator" and doing it on a D.I.Y. level. The album is self released on Doyle's own Monsterman Records and the band is funded by a lot of touring and not by all those Misfits T-Shirts that you see at Hot Topic. Doyle isn't going to rest on one's laurels anytime soon and is out to bring his music to as many people that he can. 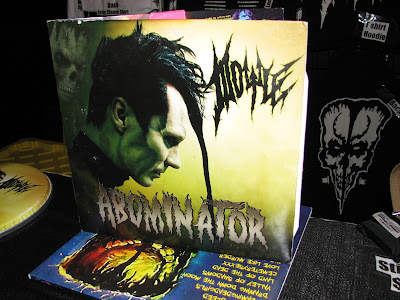 We caught up with Doyle Wolfgang von Frankenstein and Alex Story of DOYLE before their performance at The Token Lounge in Westland to discuss the new album, touring, fans, and some Misfits tidbits. Here's how it went down....
With 10 minutes to spare till the band hit the stage after our interview, we positioned ourselves to be in the heart of the action. Blood, sweat, and slam dancing come into play when you are right up front, but that is just icing on the cake when it comes to a great live performance.
DOYLE opened up with the title track off their album Abominator and the energy level was high right from the start. Doyle Wolfgang von Frankenstein is a beast when it comes to his guitar and he brutalizes it into submission. Anyone wondering how Doyle stays in such great physical shape just has to watch the man perform live to see a full workout before your eyes. "Learn To Bleed" and "Land Of The Dead" from the new album followed quickly in succession before re-visiting Doyle Wolfgang von Frankenstein's past with Misfits songs "Queen Wasp", "Ghouls Night Out", and "Skulls".
Any vocalist singing Misfits songs that doesn't have the last name Danzig tends to receive a lot of criticism. From Michale Graves of the reincarnated  90's Misfits to Jerry Only from the current version of the Misfits, the negative statements flow easily out of peoples mouths. It's a tough position to be in, but Alex Story does his best. He comes off as someone who is not trying to imitate anyone and totally respects the music he is lucky to perform. Alex has his own identity and earned his credibility with me before Doyle due to his work with his other band Cancerslug. The guy is no amateur and gives it his all on stage. The band is rounded out by Left Hand Graham on bass and Brandon Pertzborn on drums who played their parts as close to perfection as you could ask for.
The band DOYLE plays the punk/metal blend perfectly and has the live performance to back up the source material. By the end of the band's one hour set, they had performed every single track off their "Abominator" album as well as more Misfits songs that included "Green Hell", "Devilock", and "Last Caress" among others. DOYLE is a force to reckon with and a "not to be missed" live act when they come to your town. They are currently on tour till December 1 and a new album should be out by Spring of 2016. 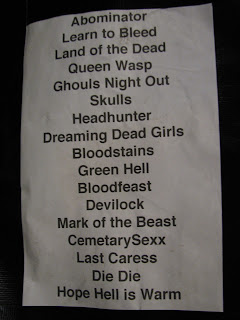 Want to see what went down at the DOYLE show? Look no further than here because Motorcityblog has you covered....

DOYLE- "Abominator" LIVE at The Token Lounge in Westland on October 13, 2015