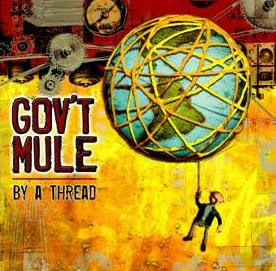 MCB is working hard to get you a bunch of freebies
for this show - tickets - CDs - SWAG
stay tuned ...but just in case get your tickets ASAP
We are negotiating now for photo/video interview etc
"This is going to be a great night of music
not just a great show" - MCB
Gov’t Mule
wsg/ Jackie Greene

Gov't Mule is proud to announce that their latest record, 'By A Thread' is set for an October 27th release through Evil Teen Records. Their first studio album in three years, 'By A Thread' finds the Mule, lead guitarist and frontman Warren Haynes, drummer Matt Abts, keyboardist Danny Louis, and bassist Jorgen Carlsson, adding a newfound shot of soul to their classic power-band sound. The band is currently on short break between legs of a massive worldwide tour, which will resume September 9th in Salt Lake City. A full list of dates is below.

'By A Thread' was recorded largely in the Texas Hill Country at Willie Nelson's Pedernales Studio in 2009, the album’s origins are apparent from the first track, “Broke Down On The Brazos,” named after the nearby river, with a deep Texas stomp for the backbeat and featuring what Rolling Stone recently called "an incendiary duel with ZZ Top's Billy Gibbons." Perhaps less descriptively named, “Steppin’ Lightly” is another burner, set off by the soulful vocals and mind-bending guitar work of Haynes, who proves anew why Rolling Stone named him one of the Top 25 guitarists of all time, and why he was voted Best Rock Guitarist in Guitar Player Magazine’s 2009 Reader’s Poll.

Gov't Mule has had over 2 million paid song downloads through their site MuleTracks and released nearly a dozen acclaimed and bestselling albums while emerging as a major touring force, routinely headlining pavilions, theaters, and festivals.

This all ages show will happen at 7:00pm.