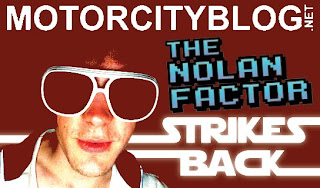 The Nolan Factor
The Real Jeff Nolan
Phonotropic Fridays at the Crofoot Pontiac
A most recent Phonotropic Friday was host
to a restrained and bedazzled Daniel Zott
(thegreatfiction.com)
With technicolor feathers woven into a mound of tangled hair, a circa 1988 Pistons sweatshirt, and an unshaven, sleepy look this man embodies the "freak folk" label. Performing solo with only an accoustic-electric and a macbook his sound could best be described as a stripped down version of every Radiohead song you've never heard. While that comparison may put too fine a point on his sound, there is not really a more fitting way to say it.
His performance was sharp enough to kill.
He took to the Vernor's room stage for nearly an hour of soulful verse-chorus-verse, eyes closed to the world, teetering behind a microphone. In my crusade to meet every other friendly weirdo in the metro-Detroit area I was naturally inclined to have a beer with this Daniel Zott guy. My glazed-over, mumbly introduction was returned with an ear to ear smile and a pat on the arm. A brief convo about music, art, and Detroit followed (the only three things I talk about) while I gawked at his fabulous hair. A minute later he was sure to run up to me with a couple of CDs and contact info.
Gee-whiz golly, if all musicians were so nice
maybe that free copy of the Friendly Foes
wouldn't have ended up on the side of I-75...
For all of the free CDs I am given, a slim minority meet my discriminating taste. After listening to his album a few times and playing through those of his band, the Great Fiction, revealed intricate progressions, a clean aesthetic, and impeccable recording. One of the LPs came with a DVD that contained mostly live footage, expertly miked and shot from several angles, as well as brief interviews and a series of recording sessions.
Digesting the recorded materials altered my initial "Radiohead" assessment of the music. There are clearly a wide variety of influences that lie well beyond the scope of that high-grossing UK import. A parallel can also be drawn to Avey Tare's pet projects Animal Collective and Panda Bear in the sense that there is a driving rhythm or melody that can be found in the ambience.
Its the kind of stuff that the stoners who play acoustics in Ann Arbor wish they were playing.
My usual exploits, escapades, and self-aggrandizing dribble are being omitted from my semi-regular rambling column this time around.
Rest assured my last month in the most dangerous city in the US of A
involved my car catching fire, my iPod disappearing in Hamtramck,
and about $900 in traffic violations. 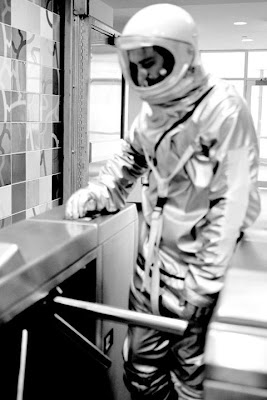