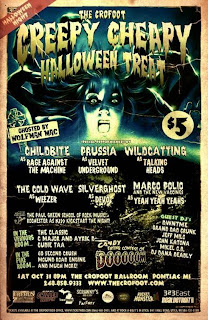 Well - its Halloween just around the corner and here at MCB we think the best place is the Crofoot Pontiac
nothing but pure terror awaits you at this party and plus because the folks over theCrofoot  know times are tough for a lot of folks out there they made this years party on the cheap for you without scrimping on the party
They appreciate thier customers and we highly suggest you take the short drive up woodward for this one
MCB approved!

The Crofoot's Creepy Cheapy Halloween treat is back from beyond the grave!

Some of Detroit's most innovative musicians will pay homage to their heroes, prepare for: Prussia as the Velvet Underground, Childbite as Rage Against the Machine, Allan James and the Cold Wave as Weezer, Silverghost as Devo, Marco Polio and The New Vaccines as the The Yeah Yeah Yeahs, and more!