One lucky winner will be drawn on Halloween October 31st 2010 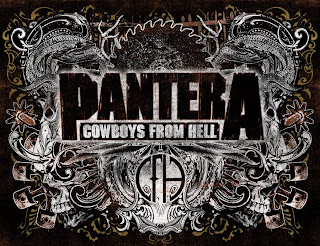 Originally released in 1990, Pantera’s COWBOYS FROM HELL turned modern metal on its ass and put Pantera in the musical history books. More than just their major label debut, most consider COWBOYS to be the official debut of the iconic Pantera lineup with singer Philip Anselmo, guitarist “Dimebag” Darrell Abbott, his brother, drummer Vinnie Paul and bassist Rex Brown.

Rhino is marking the 20-year anniversary of COWBOYS FROM HELL with multiple offerings for Pantera fans of every generation. (Complete list follows below). All versions include a newly remastered copy of the original COWBOYS album along with unreleased and rare live performances from the era, and unreleased demos for nearly every album track.

“The Will To Survive,” a previously unreleased song recorded during the album’s demo sessions, is included in the Deluxe and Ultimate packages and just recently had its worldwide premiere on Pantera’s Facebook page (www.facebook.com/pantera )last Monday, August 30 at 12 noon EDT.

“’The Will To Survive’ is a great track,” says Paul. “I am definitely proud that it will see the light of day for all the die hard Pantera fans around the world, as it shows the true musical diversity of the band at that time!”

The Ultimate Edition box lands November 22 for a suggested list price of $99.98, just in time for the holidays to round out your personal Pantera collection or give to your favorite Pantera fan. The box includes custom artwork and a 60-page booklet with rare photos, expanded liner notes and replicas from the Cowboys era as listed below.

* Previously Unreleased
† Unreleased in the U.S.
Posted up by DIETROIT on 7.9.10