The Features at The Magic Stick Lounge on September 8th 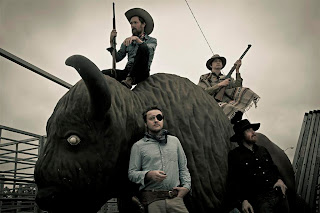 with Kevin Devine, and Carradine

The Features’ exhilarating new Wilderness quickly establishes the Nashville-based combo as one of the most exciting and imaginative bands working today. Songs like “Another One” and “Fats Domino” are marvels of pop ingenuity, animated by vivid lyrics, unshakable hooks, and experimental soul. Wilderness is an amalgamation of influences and inspirations – spanning elements of Krautrock, indie, psychedelia, and classic AOR – to conjure up The Features’ own inimitable, indescribable sound.

“I feel like we walk this fine line,” says singer/guitarist Matt Pelham. “We’re not weird enough for a certain crowd and we’re a little bit too out there for the other crowd. We fall in the middle somewhere between mainstream and hipster, which puts us in this weird place, but we’re all pretty happy to be here.”

The album – which follows 2009’s acclaimed Some Kind Of Salvation, the first release from Kings of Leon’s label, Serpents and Snakes, a venture with music publisher, Bug Music, – began coming together upon The Features’ return home after a lengthy 2010 tour alongside Manchester Orchestra. Pelham and fellow Features Roger Dabbs (bass), Mark Bond (keyboards), and Rollum Haas (drums) enjoyed a brief domestic hiatus before quickly hitting the practice space to woodshed new material. They teamed with longtime friend, producer Brian Carter, who recorded their 2003 release, The Beginning EP and engineer Craig Alvin at Carter’s Paradox Productions Recording Service in Nashville, Tennessee.

Coming into the studio straight away off the road gave The Features a full head of steam, which meshed with their desire to capture some of their on-stage power. The goal, Pelham says, was to make a record that sounded, “like the band was playing live in your living room.”

The result of the month-long sessions is as painstakingly crafted as it is full-on, with Pelham’s distinctive songcraft expertly matched by the band’s sonic inventiveness. “Big Mama” and “Rambo” had already been staples of The Features’ live show, while tracks like the swingin’ psych-pop opener “Content” were spontaneously created during the pre-production rehearsals. Other highlights include the prog-fueled “Golden Comb, with its dynamic tempo changes and multipart arrangement, and the howling rocker, “Kids,” which brandishes the Tennessean band’s native gift for their own version of meaty, big beat boogie.

“I was hearing The Monks in my head,” Haas says of the latter track, “but I think it ended up coming out sounding more like Deep Purple.”

“It’s funny,” Pelham says, “all of us at this point seem to have gone back to things we grew up listening to. We’ve started to reappreciate classic rock, which was all we could get where we lived. It wasn’t until I went to college in Murfreesboro that I found there was another world outside of things like Tom Petty.”

Since their first release in 2003, The Features have assembled quite the catalog of accomplishments, spanning single releases on the UK’s trendsetting Fierce Panda label, two well-received albums, and a long history of tours as headliners as well as supporting such like-minded artists as their pals Kings of Leon. As Wilderness demonstrates, the spirit of musical adventure continues to both define and motivate The Features.

“We’ve always kept moving with new material,” Haas says. “Even when we rehearse, we tend to not go through old songs. I’ve seen a lot of bands that rehearse the material down to where I think everyone would get bored of it. When we get together, even if it’s to rehearse for a tour, we tend to work on new ideas.”

“That’s the exciting part for us,” says Pelham, “to be in a practice space, creating a song. The more we do that, the more fun we have as a band. We like touring and playing live, but the creative process of putting a song together is the rush for everybody. So the more we can write and create, the more excitement there is within the band.”

With Wilderness, The Features have crafted yet another exceptional installment in what is shaping up as quite the impressive body of work. Ever evolving and always ambitious, this is a band in it for the long haul. The Features can’t imagine it any other way.

“I think most guys would’ve quit,” Haas says, “but all of us just love playing music. That’s the biggest part of it. We haven’t gotten bored with it yet.”

“Since we were kids, the only thing any of us ever wanted to do was play music,” says Pelham. “We aren’t really happy doing anything other than that. At this point, it’s gone on so long that I don’t know what else we would do. It’s kind of all we know.”