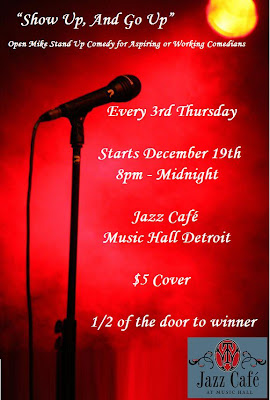 “Show Up, And Go Up” Thursdays- Open Mike Stand Up Comedy for aspiring or working comedians…on the third Thursday of every month. (subject to change due to bookings)

Jazz Café at Music Hall Center for the Performing Arts proudly announces the return of live comedy to downtown Detroit, beginning THURSDAY, DECEMBER 18 th, 9 PM- Midnight (Doors 8PM), with an open-mike extravaganza pitting area comedians against each other, with a chance to win a few bucks and return with their own set at a later date. Join a different host each month like Detroit Music/art icon and rabble-rouser, Ewolf, Former StunGun leader, Joell Leining and other local icons, who will emcee what hopefully will become a monthly event and a great way to spend a Thursday evening in the heart of Detroit’s Entertainment District.

This is an open call for everybody.

We encourage pros, semi pros or just plain class clowns, to come down and show us your stuff, in the coolest Jazz club in the Midwest, Jazz Café at Music Hall. Jazz clubs were THE venues for aspiring comedians in the 1950’s and19 60’s, and it’s in that spirit, that Show Up and Go Up, might be a first step in bringing quality comedy back to Downtown Detroit nightlife once again.

It’s only a $5 cover with half of the door going to the winner!
So bring your friends to spur you on to comedy greatness.

Jazz Café, is THE room in the city for the best in modern jazz - internationally and locally, including -The Jazz Masters Series where you can see the legends in an intimate environment and weekly series like Discovery Series with Judy Adams, ML Liebler’s, Detroit Tonight Live (First Thursdays) Sloburner with Fluent (Last Thursdays) and now Show Up and Go Up on Third Thursdays.

All aspiring comedians can get more info by contacting Ted Nagy via email at jazzcafe@musichall.org at Jazz Café- or “show up and go up” on the night of the 13th.
Comedians are urged to get there early to ensure a 10-minute spot.

"MCB IS DETROIT"
Check out more MCB-VIDEOs here
Posted up by DIETROIT on 11.12.08