BEST OF THE 2013 MITTEN MOVIE PROJECT 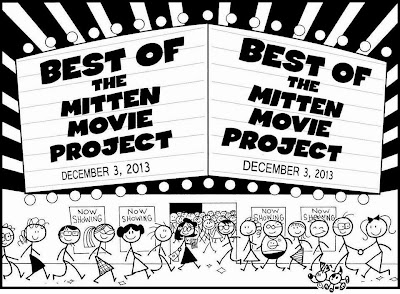 The 2013 Mitten Movie Project Audience Choice Award winners go head to head for the coveted Short of the Year Award!

The Mitten Movie Project is a monthly film festival dedicated to screening independent short films the first Tuesday of every month at the Main Art Theatre in Royal Oak. Presale tickets are available for $8 by e-mailing mangilc@yahoo.com. Tickets at the door are $10 (cash only). There will be a special ticket discount for charity: bring gloves/mittens ($5 off) or bring 5 cans ($5 off). A pre-screening reception starts at 6:30 p.m. in the Main Art lobby where moviegoers can mingle with the directors, industry professionals, and film enthusiasts. An awards ceremony will be held during intermission. There will be no formal Q&A at the 12/3 Best of the MMP. An afterglow party will be held at Mr. B’s (215 S. Main Street) -- walking distance from the Main Art Theatre -- to end the night’s activities. The Short of Year Award will be announced at the afterparty. To submit a film for consideration in the festival, visit facebook.com/mittenmovieproject for submission and technical guidelines. Submission is free. Screeners may be sent by DVD or online link. The Main Art Theatre is located at 118 N. Main Street, Royal Oak, Michigan.

3 THE HARD WAY [narrative] – TAGSTONE Media (07:49) (Michigan) (2012) Three screw-up cops at the bottom of the barrel get their hands on a case straight from the top. They set off on a chase in search of drugs, a dealer, and their elusive respect. Starring Paris Jones, Charlie Newhart, and Franco Pulice. Directed by Andre J. Ray. www.tagstonemedia.com JANUARY 2013 MITTEN MOVIE PROJECT AUDIENCE CHOICE AWARD WINNER.

LIFELESS [narrative] – The CineMa Co. and AxeFin Productions (18:46) (Michigan) (2011) When Devin (Axel Harney) receives a painful letter, it throws his life in crisis. He becomes a creature of the night seeking life’s addictions, until he meets Sheryl (Lauren Mae Schafer) who puts his painful journey into question. This dark provocative film explores loss and how it affects those around us. Written and directed by A.S. Ghosh. Cinematography by Douglas Akers. MAY 2013 MITTEN MOVIE PROJECT AUDIENCE CHOICE AWARD WINNER.

THE FLASH – SHOCK OF THE LIGHTNING [fan video] - Planetarium Pictures (13:04) (Michigan) (2013) Heartbroken, Barry Allen closes himself off from the rest of the world and perfects a chemical compound that could change medicine as we know it. Unbeknownst to him, he creates something that defies the laws of physics . . . and it changes his life forever. Starring Jordan Webb. Directed by Shawn Shaman. www.planetariumpictures.com SEPTEMBER 2013 MITTEN MOVIE PROJECT AUDIENCE CHOICE AWARD WINNER.

OPEN CITY [narrative] – Burned Bridge Filmworks (13:06) (Michigan) (2012) Summertime in Detroit. The last days before school begins once more. As Derrick, Tariq and Deshawn wander through the strange, desolate landscape of their hometown, they can talk of nothing but Shauna, the prettiest girl in school, and later make a grisly discovery that may shatter them forever. “Open City” captures youth in its rarest moments -- the time in a child’s life when there’s a shift, when innocence is lost and everything changes. Directed by Tracey D. Sims. www.facebook.com/opencityfilm, www.burnedbridgefilmworks.com APRIL 2013 MITTEN MOVIE PROJECT AUDIENCE CHOICE AWARD WINNER.

TRAIL [trailer short] - Trail Productions, Inc. (14:29) (Michigan) (in production) Mike and his newfound friend, Ryan, venture off on a weekend trip to northern Michigan. At first the trip starts off with ease, but once time sets in, the trails of their lives catch up with them. Starring Matthew Turner Shelton and Andy Rathburg. Written and directed by Phillip Lupo, Jr. www.facebook.com/TrailtheMovie FEBRUARY 2013 MITTEN MOVIE PROJECT AUDIENCE CHOICE AWARD WINNER.

Each production receives two comp tickets to the screening and a VIP bag stocked with lots of filmmaking goodies, swag, and gift certificates. An awards presentation will take place at the intermission where the filmmakers will receive custom one-of-a-kind audience choice award art pieces/awards.

In past years, a combined score from 13 randomly selected audience members and a 13 person hand-picked independent filmmaker jury determined the MMP Short of the Year. Due to some odd voting patterns between the three voting blocks (audience, indie filmmakers, press), the 2013 Short of the Year Award will now be determined by a cumulative score from all three voting panels. There will not be a MMP Press Award this year.

The indie filmmakers, the audience, and movie/entertainment press all feed off each other. Filmmakers must hone their craft, but they need an audience to watch their films. Press can make audiences aware of films by their coverage and can influence moviegoers (and sometimes filmmakers). Filmmakers have a love/hate relationship with the press. This symbiotic relationship between all three voting blocks is why all three will now be used to determine the Short of the Year.
Posted up by Detroit Area Dork on 2.12.13