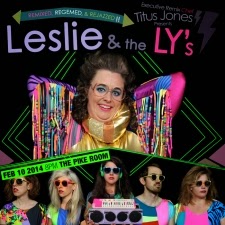 Leslie & the Ly's
with
Dean and the Delilahs
and
Boone County Comedy Troupe
Monday February 10
The Pike Room (at the Crofoot Complex)
1 South Saginaw, Pontiac, MI

Leslie Hall first became an internet sensation when she uploaded pictures of her gem sweater collection online. After quickly attracting over 2 million hits, she was left with an $800 bill for exceeding bandwidth. In order to pay back her mother, Leslie did what any 200 lb plus Iowan girl would do, she became a lady rapper. Since then, Hall has toured relentlessly with Leslie and the LY's, self-released 5 full-length albums, and produced such viral video hits as Gold Pants, Zombie Killer, How We Go Out, Blame the Booty, and Tight Pants/Body Rolls. The band's ever-evolving live show features elaborate props, flashy costumes, and Las Vegas style production at Midwest prices. You will squeal with delight when Leslie tumbles and triumphs across the stage.