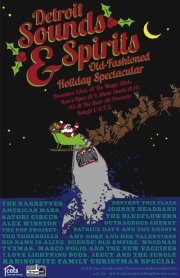 The Sounds and Spirits Spectacular is the Detroit indie-rock community’s biggest holiday event. In homage to Christmas variety shows of yesteryear, the Spectacular features 22 bands performing just one yuletide ditty.  It’s a lightning paced whirligig of cheer on 2 stages and if you’re not a fan of the act playing, don’t worry, there’ll be another in 5 minutes!  If you don’t feel a warm glow at this joyous gala, then your heart really is two sizes too small!

The Spectacular first came together in the fall of 2002, intended to be a mock taping of a boozy, sweater and scarf variety show from years past.  Equal parts Rankin-Bass, Andy Williams, and MC5.  This years show promises to be just as entertaining featuring some top-secret, spirited collaborations from former and current members of the Detroit Cobras, The Von Bondies & Karen Elson’s band.

All proceeds from the Spectacular benefit Detroit’s Coalition on Temporary Shelter (COTS). Since 2002, the Spectacular has raised over $23,000 for the Detroit-based organization, which provides emergency shelter and transitional housing for single men, women, and families with children who need assistance in becoming economically self-sufficient.