Tomorrow: Few and Far Between at The Magic Stick 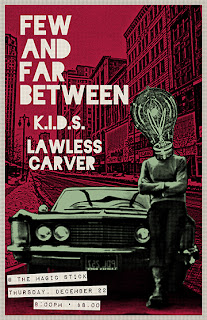 After releasing a split 7" this August on Elkion Records (as well as a remix album of 2010's "We're All Safe") the band entered the studio to begin working on a new album. For the first time in their career, FAFB has found themselves at the helm of the mixing board, tracking all 11 songs by themselves in a New York studio. Bassist Darrin Hunt reveals, "We're really happy with this new batch of tunes. They're feeling a bit more raw than our past work, but I think they really showcase a nice forward progression for the band."

While influenced by groups like Dinosaur Jr., Foo Fighters and countless others, the band has been honing their own brand of rock and roll since the late 90's. Combining intricate guitar work with a pounding rhythm section and mixing them with melodic, impassioned vocals, they create a fairly unique and dynamic sound. The band's last release continues to gain support from members of the often- reluctant music industry, including Steve Lillywhite (via his March 15, 2011 NYC radio show), "I rather like that...well done." Still making music on their own terms, FAFB continues to stand the test of time.

Joining Few And Far Between on December 22nd will be K.I.D.S. and Lawless Carver.
Posted up by Detroit Area Dork on 21.12.11