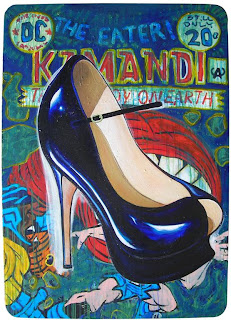 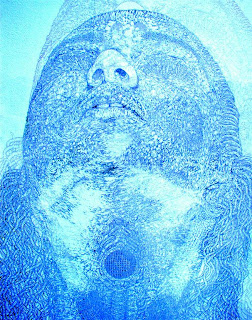 Etch, Sketch and Stilettos: The Work of Topher Crowder

Be a pART of it! Topher Crowder burst upon the art scene eight years ago after a journey of fixing computers, merchandising beer, designing Christmas ornaments in a plastics factory and packing boxes in an audio/video supply warehouse. "I always wanted to be an artist. I would take apart laser printers, put them back together and make art out of them. I couldn't suppress it anymore!"  Inspired by animated Saturday morning cartoons, vintage postcards, comic books of the 1960s and 1970s, Mr. Crowder's early works were, in effect, detailed stream-of-consciousness line drawings.

Things have changed.  After earning an MFA at Wayne State University, Mr. Crowder says, "I have a lot of time to make up for. It's not about being successful. I want to try everything and anything." The Northville Art House is delighted to present a show that reflects Mr. Crowder's diversity yet ultimately spotlights his unique vision.

The show will include:

Mr. Crowder's reverse vandalism signs -- unfinished boards branded with messages, left intentionally in forgotten public spaces as unspoken invitations for public interaction, the art itself "finished" only when the anonymous person chooses to engage (most often through spray-painted graffiti).

Mr. Crowder is an adjunct professor at Schoolcraft College.

The show is organized by Jeff Cancelosi.

The show will open in the Art House's upper gallery with a reception and artist's talk on Friday, January 6, from 6-9 p.m. The show will continue through January 28 during the Art House Gallery hours (Wednesdays-Saturdays, 1-5 p.m.). For additional information, call 248-344-0497 or visit www.northvillearts.org.  The Art House is located at 215 W. Cady Street and is a facility of the Northville Arts Commission. Admission to Art House exhibits is free and open to the public.

Etch, Sketch and Stilettos, The Work of Topher Crowder

Acrylic on Canvas by Topher Crowder

Etching on Plexiglass by Topher Crowder