Exalted as one of the most revered American musicians, WILLIE NILE is considered to be in an elite circle of venerable troubadours.
Conjuring the singer songwriter elements of Bob Dylan, Elvis Costello, mixed with a touch of rock-a-billy
and the gritty punk rock sound of the Ramones, WILLIE'S style of musicianship is renowned and a must see for any music fan.

WILLIE NILE will be in ANN ARBOR, MI at HILL AUDITORIUM on FRIDAY, JANUARY 31st. 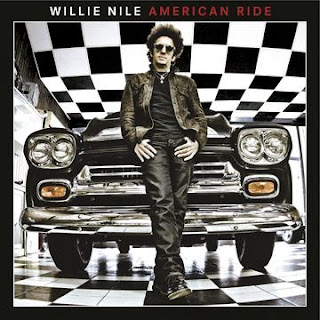 2013 was a big year for Willie Nile: American Ride album released in late June to rave reviews.
Entered Billboard's Heatseekers (new artist!) chart at #1.
"This Is Our Time" deemed Coolest Song in the World on Little Steven's Underground Garage

Anyone who's paid attention to his recent output knows that Willie Nile is currently in the midst of a creative renaissance that's produced some of the most compelling music of his 35-year career. The tradition continues with his forthcoming American Ride, due out June 25, 2013 on Loud & Proud Records, where Nile becomes the first artist released under the label's new deal with RED Distribution.

Originally set to be released independently following a resounding PledgeMusic.com campaign, Loud & Proud president Tom Lipsky heard the album and approached Nile, who has not had major-label distribution since 1991.

"This is the moment that Willie has been working toward his entire career," says Lipsky. "He has enjoyed the admiration of the artist community and media for many years. American Ride, the song and the album, truly define him and his vision as an artist. Now, in partnership with Loud & Proud, it is time for the public to become involved with Willie. We look forward to helping him bring his music and his stories to fans around the world."

The timeless qualities of melodic craft, lyrical insight and emotional engagement that have endeared Nile to listeners around the world are prominent on American Ride, which ranks among the most powerful and personally charged work of his three-and-a-half-decade recording career.

"It's pretty rockin' over all, but there are some left turns and right turns along the way," Nile says of the album, which was fan-funded through Pledgemusic.com. "There are songs about the rights of man, songs about freedom, songs about love and hate, songs about loss, songs about God and the absence of God, and songs about standing up for your fellow man. It's upbeat and full of life. I'm thrilled with how it came out."

American Ride offers a bracing set of 11 original compositions, and one well-chosen cover, that rank with the catchiest and most vivid music that Nile's ever delivered. From the everyday wisdom of "Life on Bleecker Street" and "Sunrise in New York City" to the broader observations of "This Is Our Time" and "Holy War" to the rock 'n' roll abandon of "Say Hey" and the road-tripping title track, the album consistently lives up to the artist's reputation for writing songs that are as impassioned as they are infectious, and performing them with the fervor of a true believer. Several of American Ride's recurring themes come into focus on the last two songs, "The Crossing" and "There's No Place Like Home," which end the album on a note of humanistic uplift. Another highlight is a fiery reading of Jim Carroll's "People Who Died," recorded as a tribute to both Carroll, who passed away in 2009, and to Nile's late brother John.

Having launched his recording career at the height of the major-label era, and never comfortable with the baggage that comes along with being a major-label commodity, Nile has in recent years embraced the autonomy and freedom of his current indie status. To bring American Ride to fruition, he decided to take his case directly to the fans, financing the album's recording, manufacturing and promotion via the Pledgemusic.com. Fans enthusiastically rallied to the cause, and Willie far exceeded his financial goal.  In the midst of these fan supported efforts, a few labels took note of Willie's success and expressed interest in American Ride. The decision was made to partner with Loud & Proud, thereby combining strengths both sides could bring to marketing the release.

Willie Nile's fans include Bruce Springsteen, with whom he's guested onstage on multiple occasions, and Pete Townshend, who personally requested him as the opening act on the Who's 1982 U.S. tour. Other avowed Nile admirers include Bono, Lou Reed, Paul Simon, Ian Hunter, Graham Parker, Jim Jarmusch, Adam Duritz, Little Steven and Lucinda Williams, who once remarked, "Willie Nile is a great artist. If there was any justice in this world, I'd be opening up for him instead of him for me."

Born into a large Irish Catholic family in Buffalo, N.Y., Willie began writing songs in his early teens. After graduating from the University at Buffalo with a B.A. in philosophy, he moved to Manhattan's Greenwich Village. During his first winter there, he was sidelined by pneumonia. While spending nearly a year recuperating, he concentrated on honing his songwriting skills. After his recovery, Nile became a popular fixture in the Village's folk clubs, while drawing inspiration from the emerging downtown punk scene. His budding career received a major boost from a high-profile New York Times piece by legendary critic Robert Palmer. The local buzz stoked by that story led to a deal with Arista Records, for which Nile recorded Willie Nile and Golden Down, released in 1980 and 1981, respectively. Those albums won a sizable audience and generated reams of press raves. But his progress ground to a halt after legal disputes with his label caused him to walk away from the music business, beginning a recording hiatus that lasted for nearly a decade.

Although he continued to write new material, Nile maintained a discreet distance from the spotlight until 1991, when he reemerged with a new deal with Columbia Records and a new album, Places I Have Never Been, which restored the artist to prominence with fans and critics. The following year, he went the independent route with the four-song EP Hard Times in America. Willie Nile — Archive Alive, documenting a 1980 performance in New York's Central Park, was released in 1997. In 1998, Nile lent his unmistakable voice to the all-star concept album Largo.

In 1999, Nile's Beautiful Wreck of the World marked the start of an exciting new chapter in his career, one in which he's wholeheartedly embraced his new indie status to create and distribute his music free from corporate agendas. His new approach yielded substantial results, with the effort chosen as one of the year's Top Ten Albums by critics at Billboard, The Village Voice and Stereo Review. During this period, Nile substantially stepped up his touring activities in Europe, where he's since built a large and enthusiastic following.

The well-received Streets of New York, from 2006, ushered in the most productive and prolific period of Nile's musical life. The CD Live From the Turning Point and the DVD Live From the Streets of New York followed in 2007 and 2008, respectively, as did another widely celebrated new studio album, House of a Thousand Guitars, and 2011's The Innocent Ones, which won some of the most enthusiastic notices Nile's ever received: The BBC called it "stunning . . . THE rock 'n' roll album of the year," and Rolling Stone included it in its "Top Ten Best Under-the-Radar Albums of 2011." USA Today named the album's anthemic lead track "One Guitar" as the number-one song in the nation.

"It's been a great time," Nile says of his recent activities. "I've been touring more in the last two years than in my entire career up until then. I'm in Europe four months a year and we've really built something solid over there. The fans are so great, so vocal, so supportive, and I'm deeply grateful to each and every one of them."

With American Ride now a reality thanks to his — and his fans' — efforts, Willie Nile is moving with the unmistakable momentum of a deeply accomplished artist who's just hitting his stride.