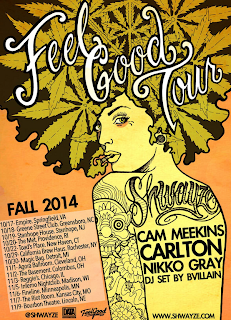 Shwayze's story of success is considerably short, taking in mind that gut was all he needed to achieve his dream. The rapper who shows his face in the rap scene with his tracks "Buzzin'" as well as "Corona and Lime" did have a personal struggle early in his life that brought him a greater courage in taking his life direction to a better future. He was born Aaron Smith in 1986 in Malibu, California. While the region he grew up in is closely attached to the high lifestyle and the luxury it's drenched with, Shwayze settled on the less prosperous side of the town. He lived in a trailer park, juggling his time to work at several jobs while helping his grandfather as a handyman. "Everyone else pretty-much got sick of me," he said, "and the only choice I really had was working for my grandfather, a handyman, as his assistant installing doors and windows, and fixing light bulbs for old ladies..." It was before he did the unthinkable.

While hanging out with his friends at a local club in 2005, Shwayze made his own destiny by accumulating his courage to get on the stage at his own will. Whitestarr ... was headlining the live music event that night and its lead singer Cisco Adler was observing from the side of the stage. Shwayze jumped to the stage and started freestyling accompanied by Whitestarr's drummer Alex Orbison who provided the beat. "I was like, 'I'm the only black kid in Malibu...' And the crowd went crazy," Shwayze recalled. "I looked over to the right and there was Cisco on the side of the stage. That was the first connection we had." The defining moment was followed by regular meetings between the full-of-energy teenager and Adler.

However, all came with a persistence and struggle too. "I wasn't the priority at the time," Shwayze gushed. "I'd sit on the couch and just wait for him to have an opening. I'd sit there and chill, play some piano, pick up the guitar, whatever. Then he'd be like, 'Wanna make a track?' I'd say, 'Hell yeah!' I was that kid. At first I thought maybe I'm being a little brat, but he's really down with that. I think he just liked my persistence." From Adler's side, Shwayze was more than just a persistent kid. "I knew he had talent and charisma, so we started hanging ...out,"

Adler explained. "It takes me a while to get in the studio with someone. Shwayze begged, begged and begged me. Finally, I said, 'Alright.' He showed up one day and that was it. We started working together and it was easy." The result of their creative sessions was more than they could ask for. A bunch of fresh tracks serving as a melting pot of hip-hop rhythms, acoustic guitars and easy-listening melody create a wave of success for both. Shwayze was then signed to Geffen and able to record his self-titled debut. Adler assisted him in the writing of the songs, the production as well as the backing vocals. The first taste of the water, "Buzzin'" entered at #86 on Billboard Hot 100 and climbed up steadily to #46. While the song was still hot on the airplay, another Adler-featuring single "Corona and Lime" took over the success of the first single to peek the same chart at #23. In the hype of his appearance as a new artist, Shwayze signed a deal with MTV to star in the network's reality show "Buzzin'" that follows him and Adler in the quest of being more and more famous. The show ... was premiered on MTV in July 2008.

A new studio album "Let It Beat" is scheduled to be released in U.S. on November 3. Snoop Dogg, The Knux and Tabi Bonney are lined up as featured guests. On how the effort will be different from the previous one, Shwayze said, "The first record was the first time Cisco and I ever did anything together so it was an experiment. It was then Cisco taught me about song structure and about the art of recording. When we got a chance to make the second record our focus was different and we wanted to take it to the next level in all aspects...production wise and lyrically."

When asked whether he feels the burden to follow the success of the first record, he gushed, "I think excitement and nervousness are similar emotions. We'd been traveling for 8 months straight playing music we created 2 years before. When we finally got a break we wanted nothing more than to make new music! For our fans, but mostly for ourselves. For us it's about the music, so we handle that and worry about the critics later."