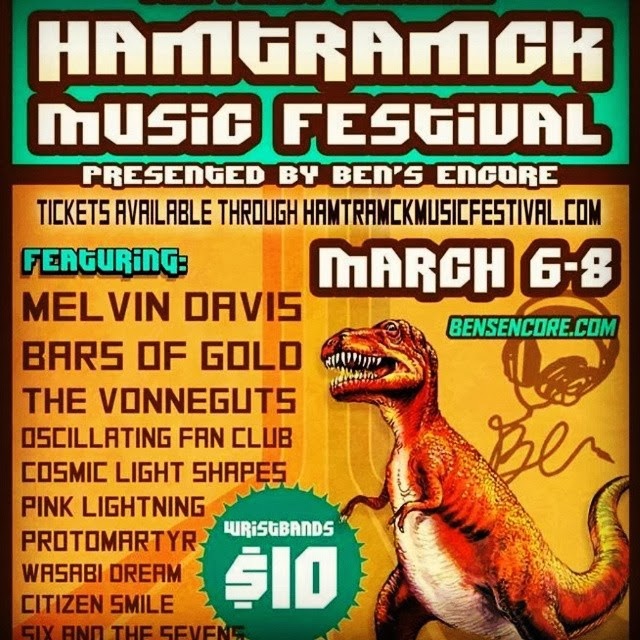 The primary sponsor, Ben's Encore, is a charitable organization, established in the name of Benjamin Borowiak, that helps provide opportunities for aspiring musicians and expand music education in the metro-Detroit area. 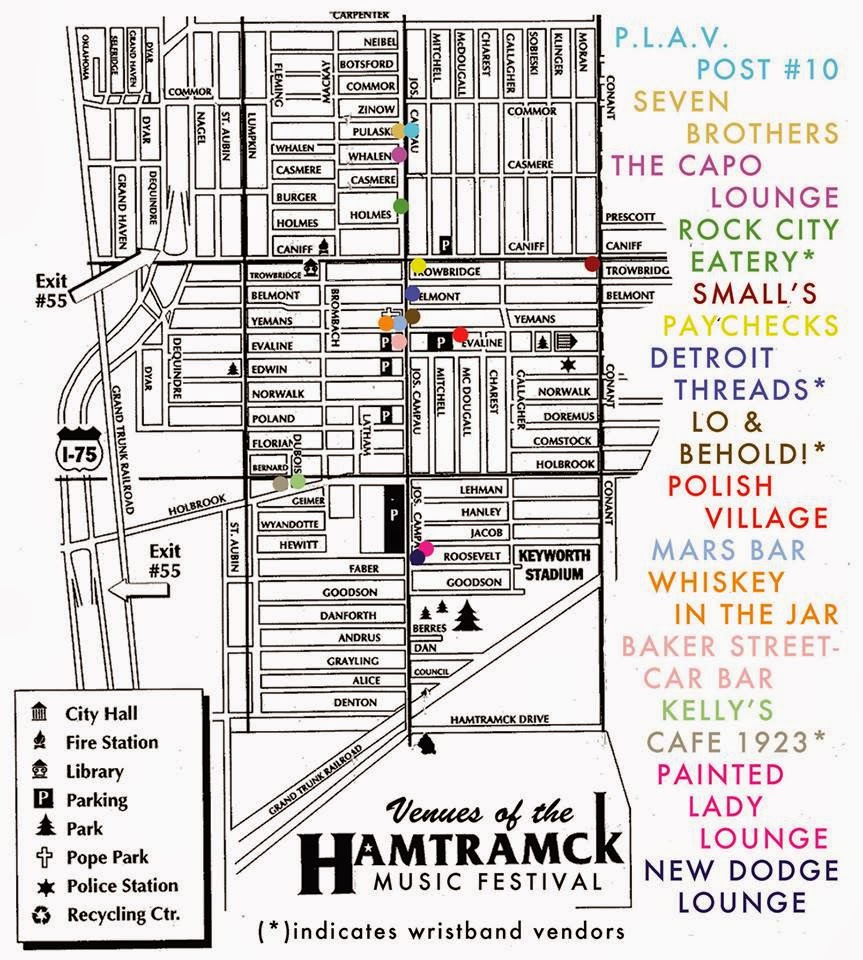 We've got a few wristbands to give away, so send an email to motorcityblog@earthlink.net for your chance to win

MOTORCITYBLOG had the chance to sit down with Eugene Strobe, one of the festival organizers, and get some more details. You might know Eugene from his involvement with Cosmic Light Shapes, The Witches, and Laura Finlay:

Detroit Area Dork: What was the impetus for creating this festival?

Eugene Strobe: I think a lot of people in the city really felt like they wanted a music festival at the beginning of March, and to keep it around the perimeter of Hamtramck, and the bars of Hamtramck. I think the cool thing about previous festivals is the proximity; being able to walk from bar to bar. Have be very centralized, and localized. It's been talked about for the past year, doing something pertaining to that. Packzi Day is a big celebration here in Hamtramck, and it's been talked about amongst the bars that they wanted to extend Packzi Day somehow. Turning it into Packi week. We thought putting this festival at the end of Packzi week really helps that continue, and helps that grow in terms of something to do in Hamtramck that first week of March.

D: Would this festival still be happening if the Blowout was still the way it used to be?

E: Uhm...that's a good question. I think it depends if the Packzi people want to have a festival separate from the Blowout. I think that because there was a little bit of a vacuum when the fest moved dates, and altered locations, I think there was a vacuum that was created. There was nothing there to take the place of it. It really spurred people on to do something this time of year, and around Packzi Day, and Packzi week. But yeah, if the Blowout were still here in Hamtramck, the first of second week of March, then the energies put into this festival might have been put into something else, some other time. There was definitely a vacuum that was created, and this is the result of that.

D: Do you think that the Blowout belongs to Hamtramck, or the Metro Times?

E: Well, I think legally these days, it belongs to Metro Times. You'd have to check with other folks, but I think they own the name "Blowout" now, I believe. So they can pretty do whatever they want with it. I don't know if it started out that way. From what I gather, the festival became what it was because of Hamtramck, because there are so many artists, musicians, bars, and clubs in Hamtramck. That was the one centralized location where something like that could happen. I think the Metro Times was one of the main sponsors early on, then they became the main sponsor, then became the owner. As far as I know, that was the progression that happened. Again you might want to check some of those facts to be certain, but I think the reason the Blowout became Blowout was because of Hamtramck; the bars, and clubs, and close proximity, and the artists, musicians living and doing their thing here.

D: Did you have any involvement in prior Blowout festivals?

D: Tell me about the Hamtramck Music Festival Committee.

E: The Hamtramck Music Festival Committee, the genesis of it was our first organizational meeting, which was January 28th. We invited people who were interested in coming down and giving ideas, and being part of this festival. It was open invite. There wasn't closed doors or anything like that. Whoever showed up was officially on the planning committee. If you were in attendance, you were one of the initial planners. Of course from that initial group of people just coming down and giving ideas, a number of people took on responsibilities. The folks that took on the responsibilities to actually make the fest happen are probably now the committee members in terms of organizing, planning next year, who's playing next year, and recruiting other people to help out. In essence there are about two dozen people in the overall committee, but there's probably a dozen, or half dozen doing the brunt of the work in organizing the festival.

D: How many venues do you have?

E: We currently have 17 venues. Waiting on confirmation for one more. 17 or 18 venues if terms of actual music for the festival weekend. On top of that we have vendors helping us out in terms of selling presale wristbands. A number of record shops in town, as well as other locations here in Hamtramck like Cafe 1923 coffee shop, Detroit Threads, Rock City Eatery, Lo and Behold, and Record Graveyard. Places like that are helping us sell wristbands presale. There's vendors, and there's actual venues where we're having live entertainment.

D: Looking at your list of venues online, it looks like you have several venues that haven't participated in the Blowout in several years. Did you make it easier for venues to participate, or add some new kind of enticement?

D: So there's no one central person booking all of these venues?

E: Correct. Each venue has a separate booker. Whether it's Cafe 1923, or Rock City Eatery, or Small's, or Painted Lady, they all have their own booker. Either it's someone that's preexisting, or someone we've assigned, or sometimes volunteers to become the booker for that venue for that weekend. So every venue is pretty much their own thing.

D: There doesn't seem to be any large venues, like the Columbus Hall, or anything like that.

E: We looked into doing the Columus Hall. We looked into doing the PNA, and things of that nature. I think the charm of Blowout also is to be in a small club, and to see bands in that setting. I think when you go to the larger halls, specifically if they're not meant to have shows there, the acoustics get kind of crappy and cruddy. We have acoustical type troubles that happen at larger type venues like that. Also I think keeping the venues smaller in terms of capacity, makes it feel more intimate, makes it a lot more personal. We just felt that the existing bars and venues in Hamtramck would be a better setting for that. On top of that, some of the rental halls have actual rental fees. We're keeping our fees really low, and we're keeping our wallets kind of tight, just because any proceeds that come out of the festival are going to a nonprofit called Ben's Encore, which provides opportunities for youth involved in art and music. We want as much extra money as possible to go to that charity.

D: I read that the price of the wristbands will be $10. Do you think that's too low?

E: I think that's a great price, because we have people that complain about beer that's more than $2 a can, and then you have people who are willing to pay $8 for a pint. I think a $10 price for a wristband for 3 nights of music, 140 bands, is a great price. We could make wristbands $15. We could make it $20, but we think that's kind of defeating the purpose. We want to involve all the community. We want to involve people. It shouldn't be a financial thing. It should be a participation thing, an involvement thing. That's why we kept things at $10. I thought that's really fair. If we sell a lot of wristbands, and hopefully we do, we're going to be happy with those sales.

D: At $10 a wristband, will you be able to pay the bands anything?

E: The bands, that's an incentive that we talked about a lot, in regards to what bands get. I've been playing in bands since I was 13 years old, 14 years old. I've been doing it for a long time. I think just being part of the festival is a great perk, because it's a great thing. We don't have a lot of money, and we don't have a lot of sponsors this year, paying bands will be difficult in a monetary way, but we want to pay bands with wristbands, extra wristbands. They can get their friend, and the girlfriend, or their boyfriend in. If they bring equipment, because we're sharing backlines so there's more room in each venue to have people watch you, as opposed to having stacks of amplifiers, and stacks of drums blocking the bathrooms, blocking the bar, and blocking the door to get in. If you bring equipment in, you get a wristband. There's little perks like that. Each booker is responsible for providing perks for their bands. I know a few bookers are trying to get a keg of beer for their bands. There's little things like that, and it's not across the board. Again, this is very grass roots. We're not dealing with mega sponsors here. If it becomes a super successful festival, and if the charity is satisfied with the money that they're getting from the festival, and there's a little bit left over, of course we'd love to give some to bands. That's probably not a conversation for this year, because it's grassroots, and our budget is really low. That could be a possibility for future years.

D: What are the big expenses for the festival?

E: We want people to be safe, and we want people to get around easily, so we're having Detroit Bus Company provide two large school bus shuttles for the festival. That's an expense. They've given us a bit of a deal off of their main rental fee. We have to pay for the shuttles, that's an expense. We have to pay for advertising for the festival. Print ads cost money. We want people to know it. There's no sense having a festival if no one knows about it. You have to promote a little bit. Aside from that, there's a few loose ends. We have a little emergency fund in case equipment breaks, or a P.A. breaks, or if something happens, we can rent a P.A. real quick or what have you. So there's little things like that. Our budget is super small. Once the festival is said and done, we're going to have all the numbers presented publicly if anyone wants to see what we've spent, or what we did, or where the money goes to, where the money went. Our budget, currently, is about $5000. I think the Stooges recorded their first record for $5000, so...whatever. 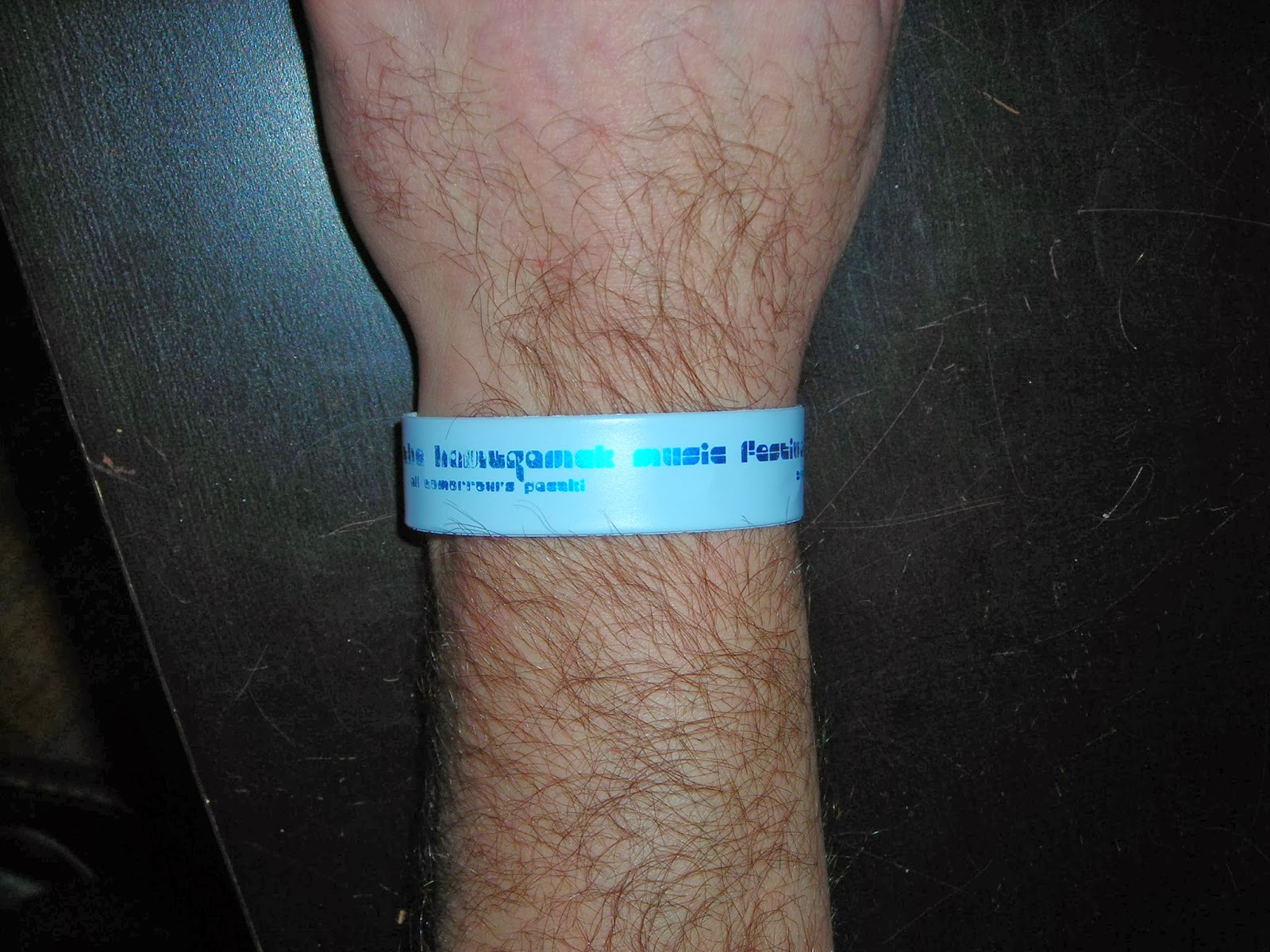 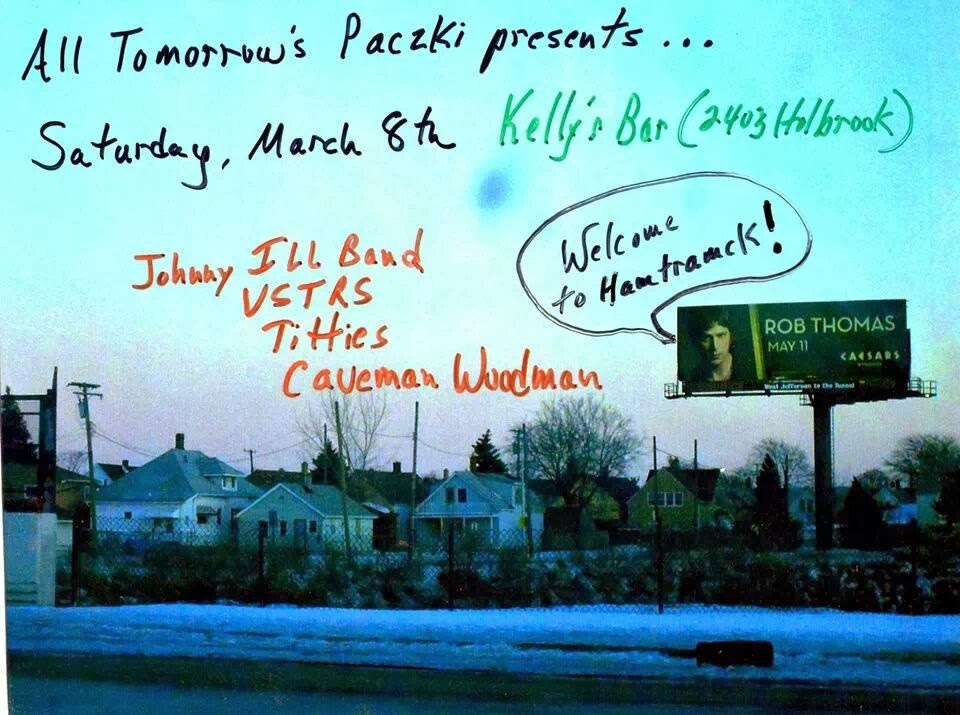 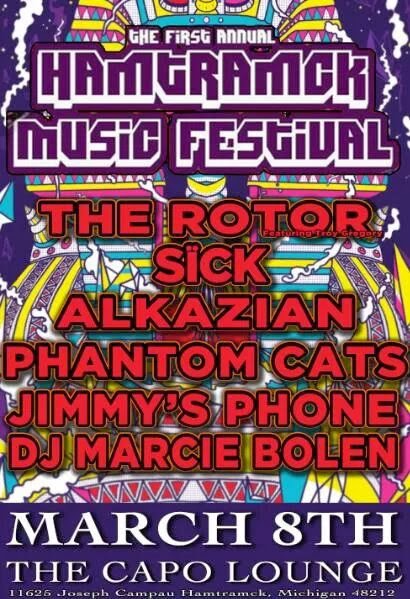 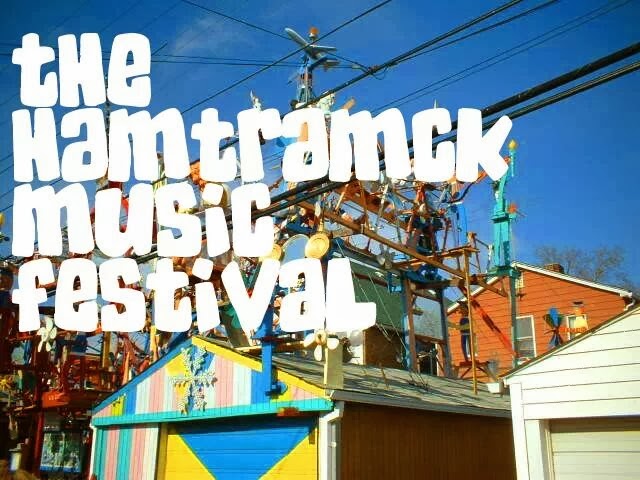 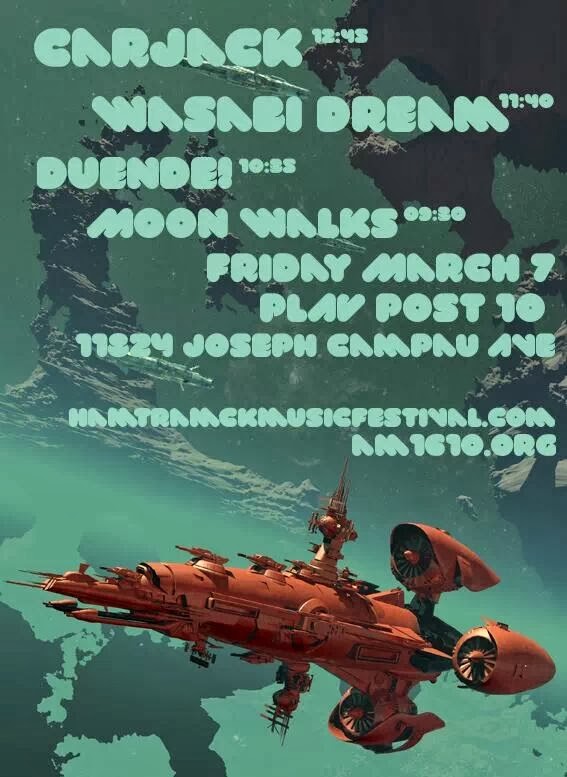 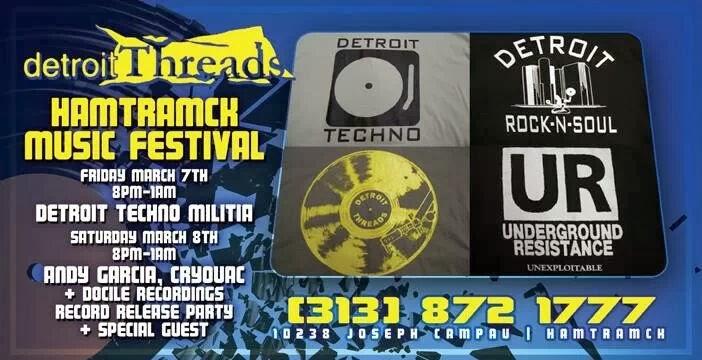 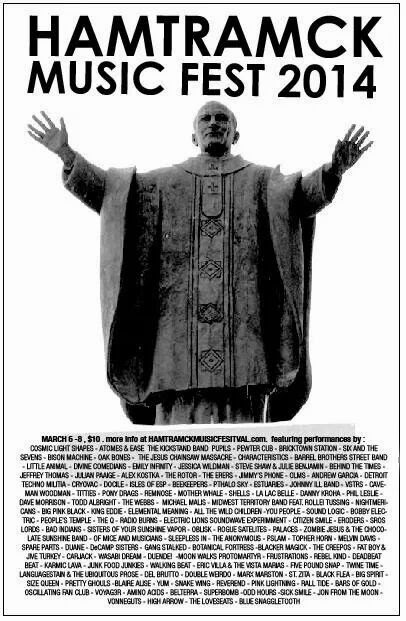 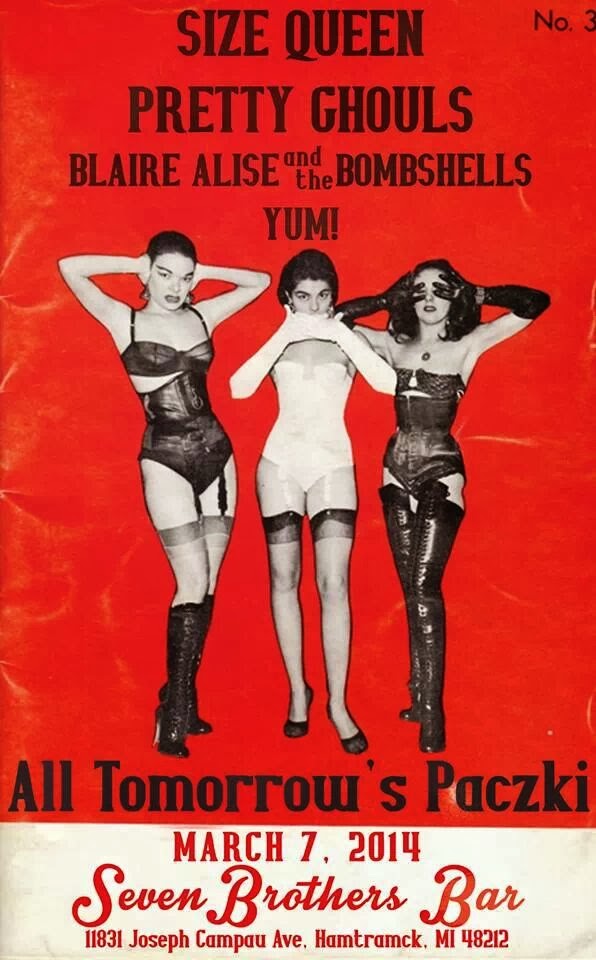 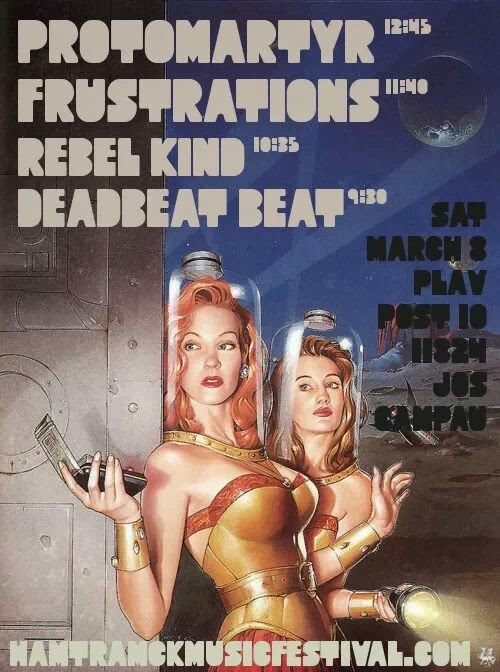