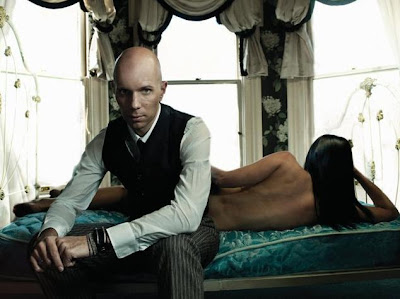 ASHES dIVIDE announces a mini tour with Seether that kicks off September 24th The Fillmore Detroit - Fresh of a summer on the Main Stage of Projekt Revolution, A Perfect Circle’s, Billy Howerdel and his solo project ASHES dIVIDE is gearing up for fall Touring Season!

MCB will be on press pass for his show - killer photos and video interview on the way
also check next week - we may have some freebies for you as well
9/24/2008 - The Fillmore Detroit Detroit MI USA
9/25/2008 - Newport Music Hall Columbus OH USA
9/26/2008 - Valarium Knoxville TN USA
9/27/2008 - The National Richmond VA USA
9/29/2008 - The Norva Norfolk VA USA
9/30/2008 - Crocodile Rock Allentown PA USA
10/1/2008 - Northern Lights Clifton Park NY USA
10/6/2008 - Amos' Charlotte NC USA
Billy Howerdel works from intuition, a modus operandi which has defined his career, guiding the move from his days in theatrical lighting around New York and New Jersey to his work as a guitar technician. Billy worked with a number of high profile rock bands, ultimately leading to his creative breakthrough as the songwriter/guitarist/producer for alt-rock giants, A Perfect Circle.
Going a step further, Billy’s uses his intuition to guide his own music. He does so without the aid of formal musical training. In fact, in a recent interview about his new project “ASHES dIVIDE, Billy stated, “To this day, I still don’t remember certain notes on the guitar neck.” He started playing guitar in high school, and picked up the technical aspects quickly, roughly in six months. He recalls getting to the point that he didn’t want to learn much more. That was the moment when he realized, “I had to stop thinking about patterns and scales, and work from emotion”. He states, “The best way I can describe it is that it was like opening your eyes and then blurring them out of focus, that’s how I approach music.”

The intuitive, unpredictable and yet immediately identifiable sound of Howerdel’s guitar work is at play in ASHES dIVIDE. This is his project – he’s the primary songwriter, musician, producer, and vocalist. It’s an album featuring a wide range of styles, moods, and thoughts, with echoes of early 80’s modern rock/Dark Wave mixed with shimmering guitars and heavy rock overtones. It’s both anthemic and subtle, an album that fans of The Cure to A Perfect Circle will certainly appreciate.

Howerdel never intended to be a rock star. It’s more like music discovered him. Growing up in West Milford, New Jersey, Howerdel would spend hours in his parent’s bedroom, listening to the one radio in his house that could receive the modern rock radio stations emanating out of Long Island, New York. Lying in bed, he would scribble down playlists and then scout out the records he loved in stores, among them The Cure, Echo and the Bunnymen, Dead Kennedy’s, and Elvis Costello.

Despite his indifference to classic rock, it was the experience of seeing Pink Floyd at Giants Stadium that triggered his lust for finding a way to work in the music industry. “It was such a massive show, and it touched me on so many levels – both visually and sonically,” he remembers. “Before that, I had no burning desire to be a musician. But being around all that energy, where everyone feels so good…I had to get involved, in some capacity.”

Still unsure of exactly what his newfound passion would entail, Howerdel began with stage lighting, working for almost any band or theater production that would ask, while at the same time devoting the rest of his free time to practicing guitar. A few years of work led to a chance meeting with Fishbone and his next abrupt decision – to migrate from lighting to guitar technician, a job he had never held before.

Thanks to his work with Fishbone, Howerdel soon became a sought-after road tech, and he soon found himself running in the same circles as many important bands of the 90’s, but most importantly, Tool. During a Fishbone/Tool tour of France, Tool frontman Maynard Keenan and Howerdel became friends, which led to the guitarist’s next unexpected career choice.

“ I had just come off the road with David Bowie, and I decided I needed to give the music I had written more time to evolve than was possible on the road,” remembers Howerdel. While working for Guns N’ Roses as a Pro Tools Engineer, a position that afforded Howerdel the luxury of staying in Los Angeles, he bumped into Maynard at a bar in Hollywood. Howerdel mentioned that he was looking for a room to rent, and Maynard offered to have him move into his house in North Hollywood. While living together, Maynard heard some of Howerdel’s music, and after a search for a suitable female vocalist, Maynard casually mentioned an interest in singing on his instrumentals. Howerdel recalls, “It was very organic how that collaboration came about.”

This initial collaboration led to A Perfect Circle, whose credits include two platinum and one gold record. Unlike Tool, APC featured a moodier, more melodic sound that was built off of Howerdel’s guitar work. Although the band eventually went on hiatus, it was during some of the final recording work on the (mostly) covers album eMotive where Howerdel took his next creative step, performing lead vocals on several tracks.

ASHES dIVIDE continues Howerdel’s growth as an artist in his own right. “It was important for Billy to go and do his own thing and really explore his own sound and let people hear what he has to say and how he would do it on his own,” said Keenan earlier this year in an interview. Listening to ASHES dIVIDE, that point is more than driven home. Howerdel recorded all the music in his home studio, and he laughs, recalling how he would hit the “record” button from his control room, and run to the microphone in the vocal booth.

That’s not to say Ashes is a one-man project. Longtime collaborator Danny Lohner (APC, Nine Inch Nails) helped out with the recording process, while Josh Freese (APC), and Keenan’s son Devo make appearances on the album. Other contributors include Johnette Napolitano(Concrete Blonde), Matt Skiba(Alkaline Trio) and Paz Lenchantin, while Alan Moulder mixed the album. However, the music is decidedly the work of Howerdel, and features his emotional insights and musical vision.

“It’s funny, I didn’t want to tinker too much,” he says. “Sometimes I’d get something in three takes and keep it. Other times, in the spirit of moving forward, I’d try to record something that I wouldn’t normally do. It was a good exercise, making me break away from patterns, and do something uncomfortable.”

Lyrically, Howerdel wanted to explore a wide range of emotions. Although many of the topics on the record deal with real emotions and experiences in his life, Howerdel often cloaked the stories into a fictitious narrative. “I started taking acting lessons recently, and they talk a lot about displacement—using someone powerful from your past or present to bring forward emotion,” he says. “So a song like ‘Stripped Away’, the opening track, has phrases and sentiments that are very personal to me…but I have someone else in mind as the catalyst for revealing these charged emotions while protecting myself.”

‘The Stone’, the album’s first single, centers on the concept of self-worth and denial, while serving as a musical guide to the rest of the record. Howerdel says, “There are several songs on the record that deal with the idea of not being worthy or pushing people away. This song is interesting, because at times it was getting musically heavy for the wrong reasons. I think heaviness, in music, is a delicate matter. Songs can’t be heavy for the wrong reasons.”

This spring, Howerdel plans to bring ASHES dIVIDE out on the road (line-up TBD), where he can bring the songs into a new context, and where he himself can re-discover their meaning. “I don’t want these to be verbatim copies from the record,” he says. “I want to find out where these songs are going. It’s funny, for this project, I was everything from the writer to the janitor, and whatever comes in-between. It’s a weird concept, for a control freak like me, to finally be able to let these songs go and let them live.”