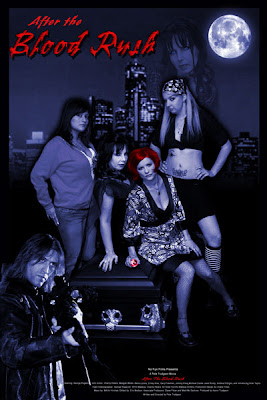 Uno's Chicago Water Grill (next door to AMC Forum 30) will host the afterparty/meet the cast after the movie concludes.

After The Blood Rush will be released to DVD in Winter 2009.

There are vampires in Hamtramck.
When the shadow of vampirism looms over the city of Hamtramck, Michigan, an old-world ethnic enclave completely enclosed within the city borders of Detroit, it's up to two government-sanctioned slayers to cleanse the neighborhood without the public ever knowing. Tracking the slayers are three nasty/sexy vamp kittens out for revenge. And that's just for starters.

The U.S. Government once created a virus to exterminate all vampires. The virus annihilated most of the vampires. As with any virus, a small percentage survived relatively unaffected or chronically afflicted with pain. Several more survived barely to live out their days as blood junkies (depowered vampires that have become a glorified rat problem). The general public hasn't reported a sighting of a supernatural for four years.

Four years, whether you live for seventy years or seven hundred years, is a very long time to lay low. Tired of waiting, a trio of vampyre vixens kidnaps the daughter of a city commissioner and turn her into a blood junkie since they were tired of hiding in pain from the virus. Meanwhile, recent attacks by blood junkies made going out at night in Hamtramck a bit dangerous. Naturally, in the backrooms of nondescript buildings, those in power make secret deals with vampire slayers to secretly handle the vampire problem. Feeling the heat, our trio of relatively unaffected vampire girls attempt to work together to also handle the "vampire problem" and save their hides.

See the drama, the danger, who lived to see another day (or night) and how they survived in this modern vampire drama soon!

"MCB IS DETROIT"
Check out more MCB-VIDEOs here
Posted up by DIETROIT on 29.9.08