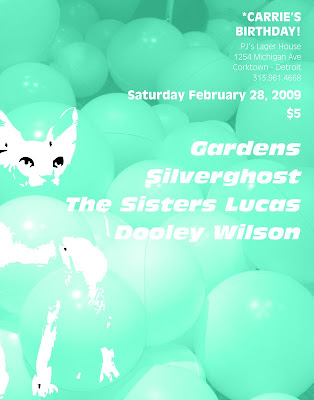 Its Carries Bday at Lager House
come on out for 4 great detroit bands and buy her a few drinks!
PJ's Lager House
1254 Michigan Ave
Corktown - Detroit
313.961.4668
www.myspace.com/lagerhouse
www.pjslagerhouse.com
Saturday, February 28 2009
Gardens w/Silverghost, The Sisters Lucas, Dooley Wilson/John Roundcity
10pm
$5
It's Carries birthday!
She'll be there with bells on.
Gardens are Detroit's leading avant garde group. Lo-fi, distorted and immeasurably catchy, Gardens will blow you away with their energy and exponentially increasing popularity and artistry. It's like The Velvet Underground, The 13th Floor Elevators and The Sonics had a musical baby.

Silverghost is the latest project of Marcie Bolen and Deleano Acevedo. True to form, the duo's music is catchy, edgy and danceable. Silverghost has a 7" released on the eternally hip Italy Records and gain new fans every bloody time they play!

The Sisters Lucas (that's twins Julie and Loretta Lucas) are making their triumphant return to PJ's Lager House. These gals will steal your heart and your ears with their beautiful and captivating music. This is folk music for the modern era-- a true appreciation for simpler times past meets that odd Motor City glamor in a way that can only be pulled off by this pair. Their new 7", just out at the end of 2008 on Bellyache Records, will be available for purchase at the show.

Toledo's own Dooley Wilson (Boogaloosa Prayer, formerly of The Young Lords and Henry & June) is back in the D on the 28th with his harmonica player John Roundcity. Roundcity is the Johnny Woods to Dooley's Fred McDowell. Wilson is quite possibly the best blues slide guitarist north of the Mason-Dixon line. Obscure 1930s and 40s blues songs combine with originals for one of the coolest set lists around.
"CARRIE ADLER IS DETROIT"
Check out more MCB-VIDEOs here
Posted up by DIETROIT on 23.2.09