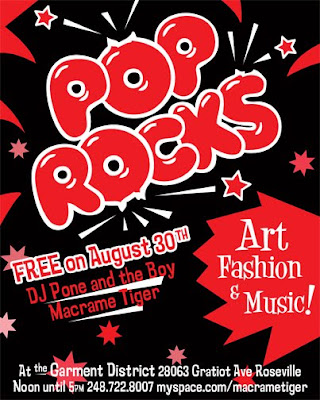 Pop Rocks
8/30/2009
Pop Rocks is the latest showing in the Garment District's
seasonal art exhibition series.
The reception party will be both open to the public
and free of charge on Sunday, August 30 2009
from Noon until 5 in the afternoon.
Pop Rocks will serve as an entrée to the
Garment District's Fall selection of chic, retro fashion.
The exhibition spotlights local talent as well as artists from Atlanta, New York, and New Jersey. The opening party will feature a live performance at 3 p.m. by Detroit buzz-band Macramé Tiger and avant-guarde disco-dancing DJ Pone and the Boy.

The seasonal exhibition series was conceived originally as an inexpensive way to decorate the store space with original works by members of the Detroit artist community.
After the surprisingly successful inaugural show
Group Hug by the Lollybot Collective the shows
have become a sparkling icon of culture
in a region facing an uncertain future.
The Garment District offers hip fashion choices
at a hep price for the more budget conscious
student/rock star/sophisto.
For the duration of the reception refreshments and entertainment are free,
art and clothing are for sale, mixing and mingling
with Detroit's coolest movers and shakers is priceless.
See you there!
Posted up by DIETROIT on 24.8.09