MP3 Mondays on MOTORCITYBLOG - pretty much gets posted whenever now... 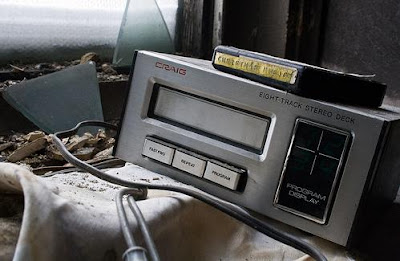 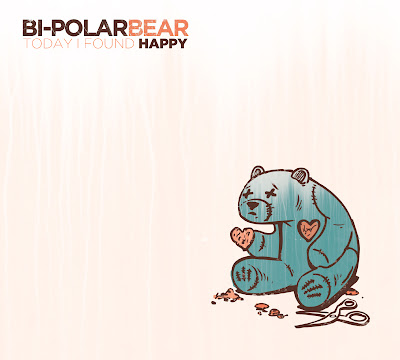 Look for the new Bi-Polar Bear album, Today I Found Happy, up on their website.

"We're a Indie Hip Hop duo based out of Brooklyn and this is our second album (which we decided to make a free download for all our fans). Our sound is somewhat comparable to Atmosphere and we're working with Blue Sky Black Death on our next project. Check below for a few links on us, including a direct download of the entire new album (mp3 version): 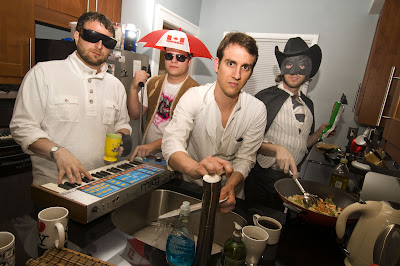 MCB's RebeccaMich will be interviewing JH
and shooting the show in Detroit
Detroit-based high-energy electro dance rockers Johnny Headband featuring Keith Thompson a.k.a. Smorgasbord of Electric Six and Panic of the indie-press darlings PAS/CAL... As a follow-up to their 2006 debut full-length Happiness Is Underrated, they're digitally releasing their EP titled Phase 3 on October 6th. It was written by brothers Chad & Keith Thompson, recorded & produced by Chad Thompson, and mixed & mastered by Jason Kuehn (http://www.jasonkuehn.com/jasonkuehnbio/)
In addition, they'll be releasing a 7" vinyl containing Wastin Time (side a) and Fly Song (side b). For a limited time, Phase 3 is available as a FREE download (link below). In support of their new record, JH will be doing a mini tour before Keith has to hit the road for the upcoming Electric Six national coast-to-coast headline tour
Catch them on 10.10.09
Johnny Headband @ Magic Stick
Detroit, MI
FREE Phase 3
Download:
http://johnnyheadband.com/PHASE3EP_320k.zip

Emerging out of the garage-punk constellation around our nation’s capitol, The Dustys signal their arrival with a cacophonously brilliant debut EP, Sticky Blood, released earlier this month on Merrifield Records. Born to write chopper music for long-hauls across scorched earth, these noiseniks meld the power-pop of Big Star with the woozy psych-pomp of T-rex, while fusing the sneering energy of the Groundhogs or the Sonics with stoned-out passages that’d sound at home on any labyrinthine Red Sparrowes opus. After holing themselves up in the studio with producer Eamonn Aiken (who’d also man the rumble of the bass on the short-player), the band would win the attention of electro-rock stalwarts The Bravery, who practically begged the band to join them on a meaty 30-date jaunt across the states -- a proposition the Dustys couldn’t refuse.

Classic without wreaking of nostalgia, smart with zero pretenses, the sound of The Dustys is simple: thinking man’s pysch-stomp, hook-laden acid-bubblegum. The kind of stuff meant to soundtrack Peyote-fueled desert benders and hallucinogenic side-show soul parties. Sound too far-fetched? Well tune in and drop out to the rollicking slab of vibe-heavy garage available for download below. Then check out the full touring itinerary. Might we suggest cranking the volume, whilst locating the date nearest you? 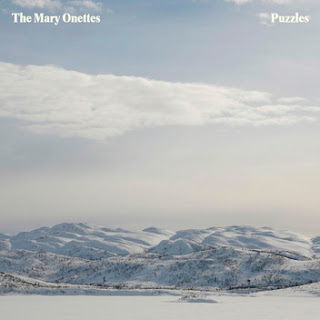 The Mary Onettes will release 'Puzzles', taken from their sophomore album 'Islands', released November 3rd on Sweden's Labrador Records, home to The Legends, The Radio Dept. and Little Big Adventure to name a few.
The Mary Onettes’ critically acclaimed debut was described as the perfect mix between A-ha and The Jesus and Mary Chain. Now they are back with a grandiose new album. Imagine a Swedish equivalent of The National on a diet of speed, Planet Earth DVDs, and 80’s guitar pop singles and you’ll have a vague idea of how amazing this is.
The year 2008 was characterized by the deaths of close relatives and friends of Philip Ekström (singer and songwriter of the band) and on 'Islands' he’s put more focus on the lyrics. 'The Disappearance of My Youth' and 'Cry For Love' were written in his girlfriend’s mother’s estate and most of the songs on the album are highly marked by his time in Stockholm after her death.
“The songs are almost too personal and I’ve had a hard time playing them for friends. It’s like all I want to do is keep them to myself.” (Philip).
The lyrics are retrospective with themes of lost youth, transience and death.
The first single 'Dare' was no. 1 on Elbo.ws, 'Pleasure Songs' from the debut was Single of the Week on iTunes with half a million downloads. The Mary Onettes have had two songs feature in the TV-series Grey’s Anatomy and their first single on Labrador was tagged Best New Music on Pitchfork. Things have been going well since The Mary Onettes signed with Labrador, but the band has certainly had their ups and downs.
.
”The title ‘Islands’ came up because I see the tracks on the album as small islands in different shapes and forms where every song is like a record of it’s very own. Johan on Labrador Records suggested the same title without having heard me mentioning the idea, so that was a coincidence too good not to pursue.” (Philip) 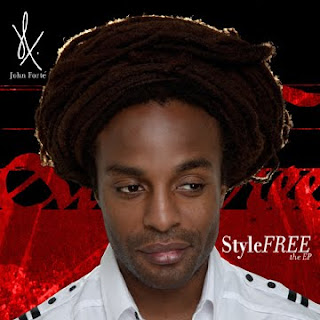 John Forte's StyleFREE the EP hits stores today!
John has gone from working with the Fugees on one of the biggest hip-hop albums of all time, to being incarcerated on drug trafficking charges, to receiving an official pardon from President Bush and re-starting his life as a new man. He reflects on this incredible journey in the form of his triumphant StyleFREE the EP.

John sings, raps, and plays guitar on the seven song set, which is his first release since leaving prison.You can stream the full album on AOL Music and you can check out the mp3 for "Nervous" here

Grammy-nominated singer, songwriter and producer John Forté is pleased to announce StyleFREE the EP, his first collection of new music to be released in eight years. The EP debuted on John’s new website, johnforte.com on July 14 – exactly nine years from the day he was arrested on charges of drug trafficking – and is now available via all online retailers, with a physical EP dropping on September 22.

Forté’s undeniable talent as a lyricist and musician, far from diminishing during his incarceration, has grown and matured. His new songs, full of powerful social commentary combined with hope and inspiration, bear witness to the remaking of a man and his struggle to remain free – they are a testament to his spiritual journey and proof that the phoenix can, and will, rise from the ashes.

Despite having been largely removed from the tech revolution the past 7 years, Forté has wasted no time embracing new technologies and new business models with regards to his music. He is selling StyleFREE the EP direct to fans on http://www.johnforte.com/ , his new, media-rich website where fans can watch several new videos, interact with the artist, and hear streaming audio of the entire EP.

(If you would like to host this MP3 but cannot use this widget, please let us know).
Best known for producing and co-writing tracks for The Fugees' multi-platinum album The Score, as well as recording two solo albums, PolySci (Columbia; 1998) and I, John (Transparent; 2002), which featured guest appearances by Herbie Hancock, Esthero and Tricky, and included a duet with Carly Simon, Forté dropped several MP3s into the blogosphere, including "Life Has Just Begun (Returning Home)," “Homecoming” (featuring Talib Kweli) and a remake of Kate Bush’s “Running Up That Hill”, all of which can be heard at johnforte.com, shortly upon his return.

In addition to recording, Forté has been writing (he signed a book deal with Simon & Schuster for his memoir), touring (he recently joined fellow artists Talib Kweli, Chrisette Michelle, and Pharoahe Monch on stage as special guests of The Roots at Highline Ballroom, showcased at SXSW, and returned from Ireland having performed with Ben Taylor and David Saw) and is actively working with at-risk youth at In Arms Reach, a Harlem-based initiative for children of incarcerated parents. 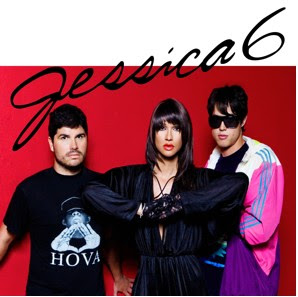 Jessica 6 Debut EP
Fun Girls
Drops October 6th
“Fun Girl (Byzar remix)”
Jessica 6 has emerged as something like a phenomena of 2009.
Their spooky and mesmerizing first single,
“Fun Girl”,
a soulful and languid low-velocity disco track, has been buzzing around the internet way ahead of it’s release, and is now available as a limited edition 7-inch with fold-over sleeve, and includes a B-Side of the emotional ballad “Not Anymore”.
Click here for a free MP3
of “Fun Girl (Byzar remix)!
The core trio of Nomi Ruiz as vocalist/songwriter, Andrew Raposo on bass and Morgan Wiley on keyboards met through their involvement with 2008’s critically acclaimed Hercules and Love Affair, an electro-disco outfit formed in the fires of New York’s dance music scene. Their diverse talents coalesced in a sexy sound destined for the dance floor, and after an extensive world tour, the three harnessed the synergy they shared on stage to create original music. They recast themselves as Jessica 6, named aftera character in the futuristic, hyper-sexed 1976 Michael Anderson movie “Logan's Run”.
Singer Nomi Ruiz was born and raised in Brooklyn. Music was her childhood paradise. As a teenager Nomi gravitated towards a diverse movement of artists dedicated to transforming the contemporary music scene. Since the release of her 2005 debut album Lost In Lust (an album of ballads wrapped around hip-hop heavy street samples) she’s toured the world with Debbie Harry, Antony & The Johnsons, and Cocorosie. Her performance on Hercules & Love Affair’s Chicago house-inspired “You Belong”, a duet with Antony, was compared to Yazoo-era Alison Moyet by Dazed & Confused, and the UK's Guardian referred to Nomi as “a performer who boasts the spookily effortless air of a future pop icon.”
Andrew Raposo and Morgan Wiley were members of Automato, whose 2004 album for Capitol Records was produced by James Murphy and Tim Goldsworthy of DFA Records. Morgan and Andrew have maintained a close working relationship with DFA, most notably by contributing to both the recording and live aspects of LCD Soundsystem and Hercules and Love Affair. Their production company serviced the B-sides for the first H&LA album and H&LA remixes of Goldfrapp, Cut Copy, Chaz Jankel, and Aeroplane feat. Kathy Diamond.
Earlier this year, Andrew and Morgan worked
with Tim Goldsworthy again on the new Massive Attack album.
Jessica 6 is now preparing for October’s highly anticipated, digital release of the Fun Girls EP and music video, followed by a Spring 2010 full-length album. The EP will include remixes by NYC based producer Olivier Spencer, who is known for his work with Still Going & House Of House as well as a remix by Germany’s Keinemusik, Illbient pioneer BYZAR, and other worldwide surprises 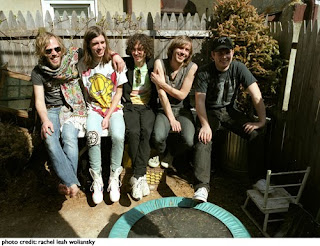 An early treat to fans, Free Energy will release their debut digital EP, September 22 on Astralwerks/DFA Records. The three song EP will include single, "Free Energy", non-album track "Something In Common" and "Dark Trance" which is on the forthcoming album.
The EP will be available on iTunes and the band will be selling a CD version of it on tour.
Adding to their non-stop touring schedule, the band will join The Rakes
on their North American tour which kicks off on Halloween
we are almost caught up on our listings
will drop another listing tonight or tomorrow to kill our backlog
its will be about 30 deep
Posted up by DIETROIT on 22.9.09