Start your weekend right with some free vinyl from HISTORICS

MCB loves the vinyl so much that we stay late and work to get you every last little piece we can for free from all of our pals out there - be the 5th and 7th emailer
motorcityblog@earthlink.net
We should start a new weekly post called Vinyl Fridays...hmmmm 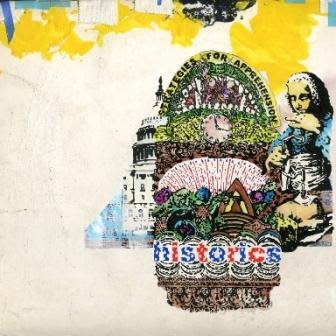 It may seem as if a cosmic aligning of the stars is the only explanation for how the men of Historics came together to release their compelling debut album, Strategies for Apprehension. It’s difficult to imagine what a collaboration between Don Devore (Amazing Baby; Ink & Dagger; The Icarus Line), Josh Grubb (VietNam), Mickey Madden (Maroon 5), Jeff Knutsen (Fast Fourier), and Matt Werth (Favourite Sons) may sound like. Despite their disparate backgrounds, Historics’ have created a meticulously crafted and inimitable sound.

Recorded over the last year in New York and L.A., Strategies is a collection of art-damaged pop that’s as catchy as it is experimental. Over the album’s 45 minutes, the band drifts between from sun-kissed psychedelia, pulsing slowcore, shaggy garage rock, and droning electronics. Strategies opens with “Skin Orders,” a tug of war between angular acoustic guitar strums and swirling keyboards, before shifting into a dream-pop chorus. “Taverns” is ripe with bittersweet bliss, where Devore’s melancholy lyrics linger over Grubb’s hypnotic guitar licks.

Check out an mp3 of “Skin Orders” here,
and the video for “Taverns” here.
The most unique moment on Strategies might be the guest appearance by hip-hop’s original extraterrestrial, the legendary Kool Keith,. Keith’s bizarre flow on “Take it to the Top” is complemented by a scattershot pastiche of quirky sounds that defy categorization.

All twelve tracks are rich with sonic detail, a testament to Devore’s abilities behind the board. Devore, who helmed the album’s production with help from his band mates, shape and focuses seemingly incongruous sounds into one mystical, unified vision.
Posted up by DIETROIT on 18.9.09