We are posting this for 3 reasons - 1st, cool flyer - 2nd we have covered GT plenty of times and hope to get a photo pass again for this show - 3rd, more praise for the Crofoot who continue to dominate in cross promotions in the motorcity
BTW the show has moved from ROMT to Compuware Arena 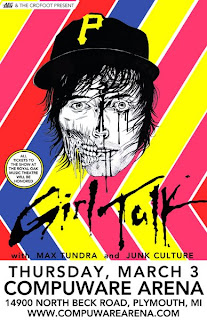 Due to tremendous demand, the Thursday, March 3, 2011 show scheduled
at the Royal Oak Music Theatre will be moving to a larger venue with
bigger sound, bigger lights, and a huge dance floor.

All tickets purchased for the originally event at the Royal Oak Music
Theatre will be honored at the door.

“A Girl Talk show is a huge crazy party, and we are incredibly excited
to double the size of the party by moving the show to the Compuware
Arena in Plymouth,” says Dan McGowan of the Crofoot. “We are equally
excited to produce a show for the first time in this beautiful arena”.
“The show, a co-promotion with AEG Live, is the first of what we hope
is a long series of great concerts at Compuware,” McGowan added.

Celebrating 10-plus years of sample-obsessed production and relentless
touring, Gregg Gillis (aka Girl Talk) returns to Metro Detroit for his
biggest and wildest dance party yet.

Since 2008 Girl Talk has played almost 300 shows and hardly taken a
full week off from hitting the road. He’s playing even larger venues
and making even more of a spectacle—he’s employed a small crew of
toilet paper launching stage hands, who also propel confetti,
balloons, and inflate oddly chosen props into the audience.

All tickets purchased for the originally event at the Royal Oak Music
Theatre will be honored at the door. There is no need to exchange
tickets. For questions regarding Royal Oak tickets – please call
248-399-2980 x 13.
Posted up by DIETROIT on 30.12.10