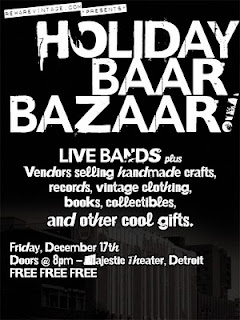 This year’s Holiday Baar Bazaar is going to be a holiday treat for everyone - The Majestic Theater will be host to 30+ vendors on Friday, December 17th from 8pm-2am. We are very excited to have some very special bands (TBA) playing while you shop!  As always, admission is free, doors open at 8pm, and this is an all ages event. Shoppers can drink, watch a free show and shop til 2:00 am!

Come the 2010 Holiday Baar Bazaar for locally made and unique vintage items from Michigan based businesses!

Check the website to see this year's vendors!
Posted up by DC in Detroit on 15.12.10