I'm happy to say, Detroit will not be left out of the festivities this year, as the good people of the Shadow Art Fair have decided to forego the winter art fair in order to bring us this bit of devilish Germanic awesomeness. If you have a big black fur suit, FINALLY this is your chance to wear it. (Don't pretend like you've never wanted a big black fur suit.) 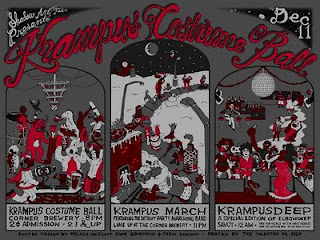 The Shadow Art Fair presents:
the Krampus Costume Ball and March
December 11, 2010
Corner Brewery
720 Norris Street
Ypsilanti, MI 48198
(Corner of Forest and Norris between River and Huron, 2 blocks north of Cross Street.)
We are trying something new with this year's Winter Shadow Art Fair.
There will be no vendors, no vendor applications, no deadlines, no jury process.

Instead, the Shadow Art Fair will host a costume dance party in the name of Krampus, a German and central European mythical creature that represents a sort of anti-Santa Claus. In contrast to Santa’s gift-giving to good children, Krampus, a darker, scarier, incubus-like creature is a punisher of children who are bad.

The Krampus Costume Ball will feature DJs, dancing, a "prom pic" booth, cash prizes for the best costumes, parading through the streets of Ypsilanti, another fabulous Shadow Brew, and more. The Costume Ball will happen at the Corner Brewery, just like past Shadow Art Fairs, on the evening of December 11, 2010.

So instead of getting your application and your wares together for the Shaodow Art Fair, and instead of saving your pennies to shop the artist's tables, start working on your costume! Now! Because everyone's an artist at this Winter's Shadow Art Fair Krampus Costume Ball. All you have to do is show up and have fun.


There's more information from Shadow Art Fair's Mark Maynard on his What to wear to the Krampus Ball and WARNING… Krampus to attack Ypsi on Dec. 11 posts.

And here are some inspirational videos for your edification.