hit us up to win - motorcityblog@earthlink.net 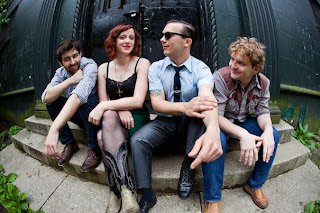 “When you decide to go into the studio,” reflects Miss Tess from her home in New York City, “the timing has to be just right.” In fact, uncanny timing informs and enhances nearly everything Tess does, from her disarming, behind-the-beat vocal phrasing to her solid yet gently swinging rhythm guitar. In the years since she first emerged, she has wisely learned to trust her sense of timing. “In this case, we had a batch of unrecorded songs, the studio I wanted to use was available, and the band was tight after touring all year.” The resulting album, Sweet Talk (available October 16), is Tess’s first studio album in three years, her first for Signature Sounds, and the debut of her newly christened backing outfit, The Talkbacks.

While still bearing hallmarks of the simmering, jazz-inflected sound that has made Tess and her former band the Bon Ton Parade a club and festival favorite, Sweet Talk introduces a more personal mix of influences. By blending her knack for melodic and rhythmic improvisation and interplay with elements of honky-tonk, western swing, and golden-era pop standards, she and her multifaceted supporting band have arrived at a style simultaneously refreshing and hauntingly familiar. “By changing the name of the band,” she says, “I wanted to let people know that our sound had evolved: now there’s a much stronger country and early rock’n’roll influence—and different instrumentation.” 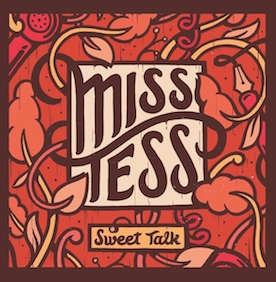 Tess is no stranger to improvisation.


Her vocals are spontaneous and playful, constantly reinterpreting and rephrasing her melodies without ever losing sight of the song’s underlying emotion. “I change the melody all the time in my own songs,” she says. “That’s my jazz background coming out. The band does the same thing. It keeps things interesting, night after night. That’s why we recorded almost everything on this album live in the studio…” To help choose the best from the multiple takes of each song, Tess relied heavily on producer Zachariah Hickman (who travels the world as the bassist in Josh Ritter’s band).

It’s this immediacy and willingness to go out on a limb that keeps Miss Tess and The Talkbacks from being a living museum of antique styles. “…when this quartet gets going, you can’t tell where the music is coming from,” writes Craig Havighurst in MusicCityRoots.com. “1930 to 2020 would be a good guess. It’s got all the classic elements and all the trained chops of great jazz, but they definitely make a fresh statement.”


Her roots in these forms are genuine.


Raised in Maryland, her mother learned to play upright bass while Tess was still in the womb, and her saxophone-playing father rehearsed a big band in the basement of their home. “I come at it from an honest perspective and sing songs that I truly feel,” she says. “I grew up listening to this old music, so my passion for it is unavoidable.” Moving to Boston 2005 exposed her to the town’s thriving roots music scene, which in turn encouraged the flowering of her eclectic sensibilities. She left for New York five years later.

The vitality and bustle of New York certainly informs Sweet Talk, Tess’s fifth full-length studio album—even though it was recorded in a farmhouse in rural Maine. The opening shuffle of “Don’t Tell Mama” weds Tess’s jazz-bred insouciance to a pulsating R&B back beat, and builds to an unhinged drum solo from Meyer. Bassist Weller is also spotlighted throughout, with several notably facile solos (including the extended intro to “This Affair”). Tess’s nimble, chromatic phrasing on “Adeline” is answered by an incantatory solo by guitarist Graefe. Sweet Talk ends with an eerie, after-hours version of the Ink Spot’s “I Don’t’ Want to Set the World on Fire,” the only song not from Tess’s pen. “It was something of an experiment,” she explains. “I wanted to record it really slow and strange…to make it different.”

It is Tess’s own songs, however, that define Sweet Talk: evocative studies that strike an elusive balance between stylishly classic and insightfully contemporary. At turns defiant, cheeky, wounded, and raucous, the songs bridge the gap between Miss Tess—the fearless, spotlit starlet onstage—and Tess, the quietly thoughtful and compassionate personality behind the scenes. The combination of her footloose stage persona and direct, unabashed songwriting is key to what makes Tess’s music so uniquely powerful. “When I’m singing my songs, I feel like I can be incredibly honest with myself and with the people listening,” she concludes. “In an strange, ironic way, it’s actually very liberating.”


“I don’t know of anyone else right now touring in the Americana scene that has such an eclectic, jazzy, old school and interesting vibe,” says Clementine Cox on NoDepression.com. “There’s an authenticity present in Miss Tess’s music. It is not contrived, not too far a stretch for the skeptical imagination. "

Get more info and get to this show!
www.misstessmusic.com