NEXT WEEK: A Night Of Hot Colorful Beats 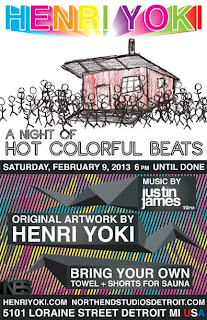 A Night Of Hot Colorful Beats

What happens when you take a Finlander from his frozen existence and transplant him into the sans-sauna icy tundra that is Michigan? If you are Henri Yoki, you build your own sauna. Finnish culture is much defined by its winter climate, which can be very, very cold. The environment is so cold and rough that the ancient inhabitants of Finland dreamt up the sauna. In the most basic sense a sauna is a tiny wooden room with a source of extreme heat used to produce steam, which blasts the occupants with heat. The sauna to the Finns is more than a relaxing way to get clean, it is a cultural institution, a gathering place for people and ideas, and a place to meditate.

Henri Yoki is a true Renaissance man, a visual artist with three Master's degrees who produces electronic music in his spare time. While building a new medical records system at Henry Ford Hospital on one side of Detroit, he has on the other side built a world-class sauna at North End Studios. After a brief but intense donation period, the $5000 budget is currently 70% funded and the sauna is nearly built. The project has taken roughly 300 hours of work and it has already got international attention. Fundraising has been through private donors in both the US and Europe. It has taken Henri, the North End Studios team, collaborating artists from Fortress Studios, and several volunteers just three weeks to raise the funds and build the sauna. It leaves good time to finish before the ribbon cutting ceremony on the 9th.

While the construction of the sauna was brief, the idea had incubated in the mind of Mr. Yoki for years. In his youth Henri had three dreams: to work for Finnish communications giant Nokia, to work in the United States, and to build a sauna while he was there. The completion of the sauna marks the fulfillment of all three dreams.

The art on display at A Night Of Hot Colorful Beats are works selected from an ambitious body of digital works created daily over the span of a year. They are mounted and printed in various sizes and substrates ranging from paper stock to aluminum panels. These digital compositions are alive with vibrant color schemes and bold visual patterns, a complete departure from the snow-covered monochrome of Henri Yoki's homeland. Illegible bits of words, wispy contours, and fields of color ebb and flow into textured abstractions. The inner workings of Mr. Yoki's mechanical mind are on full display in the mathematical confidence of his compositions. Each piece is as an unsolved (or solved) equation that resembles the happiness of the brief Nordic summer.

A Night Of Hot Colorful Beats is the culmination of extraordinary efforts. The opening reception is open to the public and begins at 6PM on Saturday, February 9, 2013. Snacks and refreshments will be available for all guests. DJ Justin James will begin his set at 10PM, after which there will be a $5 cover for late arrivals. The event shall run until approximately 2AM. North End Studios is located at 5101 Loraine Street Detroit, MI 48208.