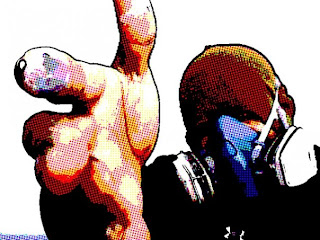 Northern United Brewing Company commissions mural
to benefit Ann Arbor Art Center August 04, 2010
Art lovers are invited to celebrate the unveiling of one of downtown Ann Arbor’s largest murals ever painted during Reveal, an exciting event on Thursday, Aug. 26, 2010.
Guests will witness the “reveal” of the original mural at its location on the back wall of Grizzly Peak Brewing Company at 6 p.m., and continue the celebration of creativity and community at the Ann Arbor Art Center 7-10 p.m.
Graffiti artist Antonio “Shades” Agee will begin the mural this Friday. The public art piece, which will span a 200-foot-wide brick wall, is being commissioned by Northern United Brewing Company, which produces and bottles beer in collaboration with Grizzly Peak Brewing Company and Jolly Pumpkin Artisan Ales in Ann Arbor and North Peak Brewing Company in Traverse City.
Shades plans to depict the flavor of Ann Arbor on the massive exterior of Grizzly Peak, while also incorporating the logos of Northern United Brewing Company. Visitors to downtown Ann Arbor will be able to watch the artist hard at work using spray cans and rollers on small segments of the wall, but will not see the finished piece until the official unveiling on Aug. 26.
“The fabric will come up, and the community will get to see the piece for the first time,” said Marsha Chamberlin, President/CEO of the Ann Arbor Art Center.
After the reveal, the party will move over to the Art Center, where ticket-holders will be treated to sophisticated snacks from Grizzly Peak, exclusive craft beer from North Peak Brewery, DJ music, and a special auction including limited-edition works created by Shades especially for the event.
All proceeds from the evening will benefit the Art Center, thanks to the generosity of Northern United Brewing Company owners The Czaplickas, Lobdells and Carlsons.
“They are so committed to the arts,” Chamberlin said. “It’s a wonderful thing when a private sector business comes forth with such an imaginative way to donate to the Ann Arbor Art Center. We are incredibly grateful to have companies like this in our community.”

Tickets to Reveal are $45; with an early bird special of $35 through Aug. 15.
To purchase tickets, visit http://www.annarborartcenter.org/ or call (734) 994-8004 x 101.
The Art Center is located at 117 W. Liberty in downtown Ann Arbor
ShadesShades, a.k.a Antonio Agee, was born and raised in Detroit, and began his artistic career tagging buildings in the Cass Corridor. Since then, graffiti has emerged from the underground, and now Shades is commissioned to paint projects around the world. Visit www.shades313.com.
Northern United Brewing Co.Northern United Brewing Co. has breweries in Ann Arbor, Dexter and Traverse City, and makes and bottles beers under the Jolly Pumpkin and North Peak labels. The company also makes Bonafide Wines, and is launching a line of craft-distilled spirits this winter under the brand name of Civilized.
The Ann Arbor Art CenterThe Ann Arbor Art Center, located at 117 W. Liberty St., is a non-profit organization dedicated to engaging the community in the education, exhibition and exploration of the visual arts. Offering studio art classes, workshops, exhibitions, summer camps and more, the Art Center is celebrating its 100th year of being the place where creativity and community meet. www.annarborartcenter.org.
Posted up by DIETROIT on 11.8.10