"you guys giveaway to many free tickets...."
is how the email started and it went on and on 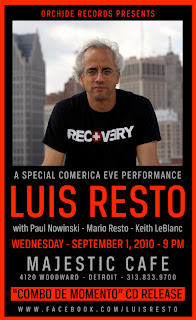 We like to giveaway the freebies
In this economy who doesn't need a little extra cash in the pocket
and some free fun to help turn that frown upside down
1st emailer at motorcityblog@earthlink.net gets a pair of guest list spots
for the infamous pre-party show at Majestic Cafe tomorrow night
Local Oscar & Grammy Award winning songwriter and keyboardist Luis Resto (background below) is currently touring as part of Eminem's band. The European leg's been completed and they've now returned to the States with stadium dates set for Detroit and New York.

On the eve of the two Detroit concerts, this Wednesday, September 1, Luis and his band will be performing a special pre-Comerica set at the Majestic Cafe, 4120 Woodward in Detroit. Doors open at 9 PM, tickets are $7.

This show will commemorate the CD release of his solo debut, Combo De Momento, previously available only on vinyl and from online services. Discs will be available at the show and there will be special surprise guests.

This will be one of the last Detroit performances of the year as Luis moves decidedly into the national arena.

THE MAN BEHIND THE CURTAIN

• Luis was an original member of the groundbreaking avante-funk Was (Not Was) band and has played keyboards on virtually every one of their albums (reference tracks: "Tell Me That I'm Dreaming", "Out Come The Freaks", "Somewhere In America", "Anything Can Happen", "You! You! You!")

• won an Oscar and a Grammy as co-writer of "Lose Yourself", Eminem's smash worldwide hit and the most successful single of his career, spending 12 weeks atop the Billboard Hot 100 & is now widely regarded as one of the most important songs of the decade.

• co-wrote the title track and six other songs on the 8 Mile soundtrack album (released on October 29 in advance of the film) which quickly became the fifth best-selling album of 2002 with US sales of 3.2 million in it’s first two months of release.

• one of the most creative and diversely accomplished musicians currently working in Detroit, Luis has amassed a voluminous list of credits with relatively little fanfare; as part of Eminem's Shady camp, he played/produced/written songs for some twenty-five Top 5 album releases in the first decade of this new century, some fifteen of which reached the coveted Number 1 position.

• most recently Luis has been credited for co-writing Eminem's smash "Not Afraid" and Lil' Wayne's platinum single "Drop the World".
Posted up by DIETROIT on 31.8.10