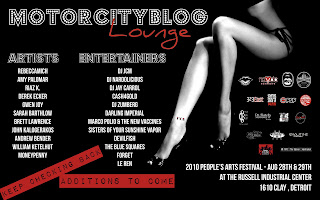 check back for more updates soon and get to this great FREE weekend event
http://www.peoplesartsfestival.com/

MOTORCITYBLOG is proud to announce its continued support of Peoples Arts Festival with its 4th rendition of its world famous MCB Lounge.

Located in the North Corridor, the MCB Lounge is a community effort converging a lucid mix of Detroit art music and fun.