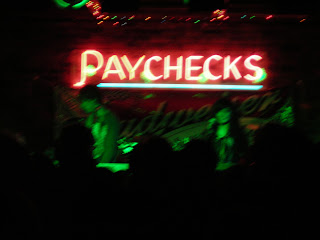 First stop was at Paycheck's to see Phantasmagoria, a sort of spacey electro-pop duo (I have to stop overusing the term "electro-pop and expand my vocabulary). Halfway into their first song, there was an equipment malfunction that delayed the show by about 10 minutes or so. It seemed to me that the malfunction happened on the stage somewhere, leading me to believe that it was a failure of the band's equipment, and not Paycheck's. I base this on no empirical data whatsoever. Of all the new acts (new to me anyway) I've seen so far this weekend, this one shows the most promise.

I zoomed over to Gates of Columbus, where Team Ethic played the lougne, and Matt Jones & The Reconstruction played the hall. For some reason, both ends of the building had bands starting at the exact same time. An awful misuse of two stages under one roof. I wasn't feeling it with either of the bands. 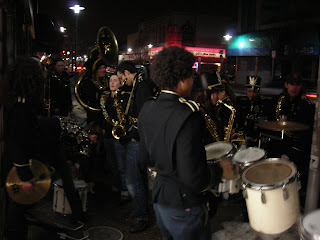 The Detroit Party Marching Band was doing their thing on Joseph Campau, just a few doors down from Baker's Streetcar Bar. 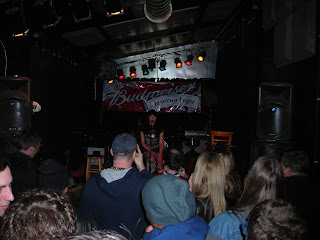 A quick two blocks north and I was inside the Belmont to see Aran Ruth at 10:40. The place was completely packed. Unfortunately, most of the crowd didn't seem to be there to see Aran Ruth. I'm not sure what they were milling around waiting for, but they wouldn't shut up. Aran Ruth's music is really mellow and down tempo, so a lot of background noise really detracts from the experience. What a bunch of disrespectful douchebags. 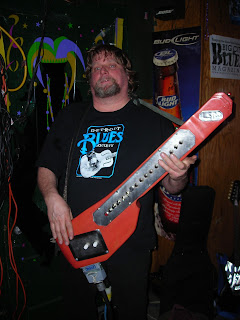 11:20 at Kelly's for Carjack. An act I was really looking forward to. To the benefit of all, Light Show Bob was playing along that night too. 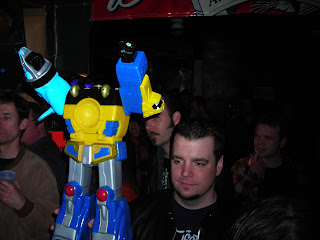 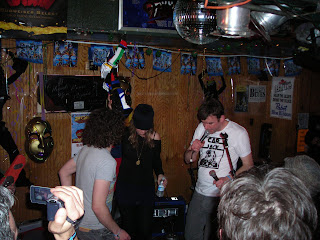 Carjack spotted Steve from Marco Polio in the crowd and invited him up to join along. Carjack, (Marco) Steve, Miss N, and the Lightar add up to a perfect storm of awesomeness. After all that, I needed a little time to decompress before I went back to Gates of Columbus. I missed out on Odd Hours and The Kickstand Bands, which played over there at 12:00. 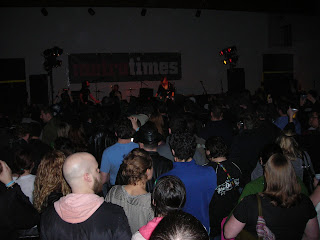 The Hard Lessons were able to draw a huge crowd that filled at least 3/4 of the hall at Gates of Columbus, which is no small feat. Word had gotten out that the band would be going on hiatus for a while, and their most devoted fans turned out. In between songs, Augie narrated a little bit of history, saying when certain songs were created and why. In what at first appeared to be improvised, he asked someone in the audience to share one of their own personal experiences with The Hard Lessons. The fan said that he met his girlfriend of 4 years at one of their performances. Augie brought the couple onto the stage, and the fan then got down on one knee and proposed. That would have been so awkward if she had said no.
Posted up by Detroit Area Dork on 5.3.11