Fourth and final night of the Blowout. I'm surprised I didn't already feel burnt out by then. I still had the energy and ambition to cram in as many bands as I could. The two inches of snow didn't help though. Worst moment was trying to drive the Holbrook overpass over I-75 and doing a 180. I guess taking that turn at 5 MPH still wasn't slow enough.

First stop was Golden at Kelly's. After nearly spinning out minutes earlier, I decided against trying to race to the Belmont to see how Atacama sounds. That allowed me to see Golden finish off their set with a cover of The Cranberry's "Zombie".

Went over to Whiskey in the Jar to try out Roofbeam Rye. Wasn't feeling it.

Back to Kelly's to see The Ashleys. This turned out to be the most likable new act of the day (new to me anyways).

The rest of my night was spent going back and forth across Conant. Stepped inside of Skipper's so see The Mantons. Didn't do anything for me.

The Jay-Vons were supposed to start at the Gates of Columbus hall at 11:00. They were still carrying in their equipment at 11:20.

Columbus Lounge was on time, and I got to see Old Empire. Not bad, but they didn't seem to do it with as much gusto as they did a few weeks back at Small's.

11:40 and The Jay-Vons were just starting. Maybe I was just already annoyed with them because they were going to make The Detroit Cobras start late, but I wasn't feeling it.

Across the street again to Skipper's where The Perennials started at 11:40. It was good, but I wasn't in love with it. The back half of Skipper's, where the bands were playing, is about 4 steps higher than the front half of the place. Every time I ran into Skipper's, I hung back in the lower half. There were always a blockade of people right at the top of the stairs, and they always had to pretend like they were surprised that they were blocking the flow of traffic. Being on the lower front half just made it easier for me to make a quick exit when I wanted to be on time for something happening at Gates of Columbus across the street. 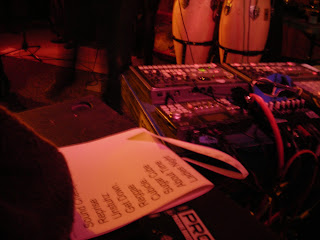 I got to Columbus Lounge early to make sure that I got a good spot for Electric Fire Babies, as I had been looking forward to it most of the night. Electric Fire Babies is normally a three piece band, but that day they had a saxophone player, a trumpet player, and a guy playing the bongos. 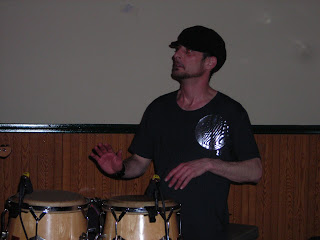 I don't know if those guys are going to be permanent positions, but that guy playing the bongos was really in to it. At the very least I hope he sticks around. 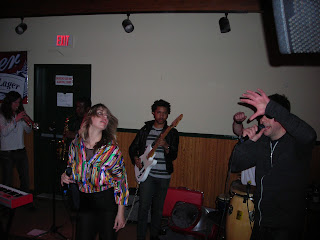 Electric Fire Babies killed it. I'm glad they weren't relegated to Baker's like they were last year, because it just wasn't adequate to hold their crowd. Columbus Lounge was a great place to put this act. The members often walk into the crowd, and being so up close draws you into their energy. 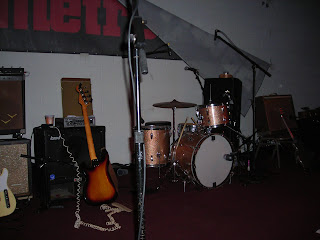 The Detroit Cobras were scheduled to go on at 1, but through no fault of their own, weren't set up until 1:30. Then they disappeared for 10 minutes. I would think that once the drum set was assembled and miked (is that a word?), everyone else in the band should be ready. 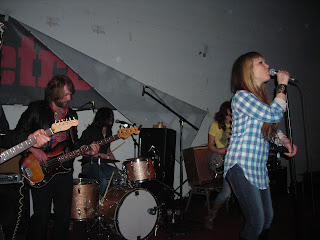 Of course it isn't a Detroit Cobras show without Rachel complaining to the other band members about sound issues. 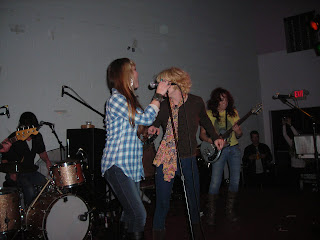 The evening's alpha-drunk got on stage and danced with the band members for one of the songs. 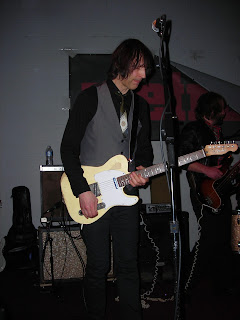 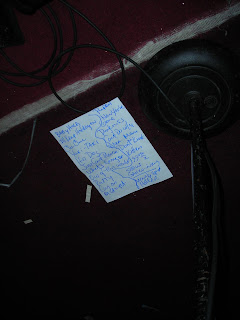 Even without playing those last 2 songs on the list, I'd say they played a long set. A derby girl standing at the front of the stage picked up this set list, and was dismayed that she didn't get to hear "Weak Spot", the second to last song on the list. It was her favorite Cobras song, and she she waited all night to hear it. Rachel replied "Sorry, but it's late, and as you can see my band has already ran off the stage. I promise to play it next time". I intend to report back on that after their next performance.

I'd have to say that this year was somewhat better logistically. Bands with a large following didn't have people lined up outside of a bar, unable to get in because the place was already over capacity. Not staggering the hall and lounge start times on Friday and Saturday nights was a bad move. So was putting Carjack at Kelly's. The place was so packed the fire marshal could have shut it down.

Every year I go to the Blowout, there's always at least one band I've never seen before that just knocks me off my feet. I'm talking about the type of discovery that causes me to tell everyone who wasn't there that they failed, and need to go back in time to do the weekend all over again. Last year that was Lettercamp. In one of the years before that it was Carjack. This time I really didn't have anything new to rave about. I liked hearing Phantasmagoria and The Ashleys for the first time, but I didn't leave the bar afterwards in a daze. It's probably just me. I spent at least half the time trying out new acts, but maybe my radar is off. I didn't get around to hearing Pewter Club, Lord Scrummage, Odd Hours, Man the Hunter, Magic Jake & The Power Crystals, Eleanora, or JSB Squad. Maybe one of them could have been the band to thrill me.

If it were up to me to hand out awards, I'd give Best Performance to Marco Polio and the New Vaccines. They not only inspired the crowd to levels of rowdiness sure to piss of any bar owner, they also took their show onto the street.