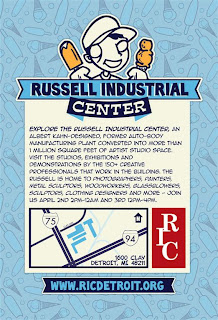 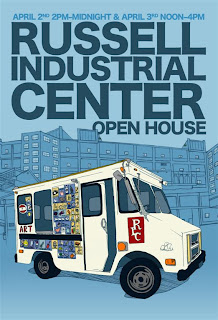 The Russell Industrial Center, a former auto-manufacturing plant, has emerged as a center for creativity and entrepreneurship by offering affordable studio space to artists, craftspeople and start-up businesses. The massive complex is the largest artist community in the Midwest, with over 200 studio spaces occupied by local and internationally acclaimed creative professionals. Its transformation from an empty industrial space to a lively community offers a unique example of the powerful changes that occur when abandoned space is re-imagined and revitalized.

The Russell is home to architects, glassblowers, painters, photographers, woodworkers, jewelry designers, sculptors, fashion designers, recording studios, architects, and many start-up businesses. MONA (Museum of New Art), Cave and five other established galleries are also located in the complex. Recently, underground graffiti artist and Russell resident, Kobie Solomon, painted the largest mural in Michigan on one of the complex walls.

The Russell has been hailed by the local and international community as a model for how Detroit may be revitalized in the coming years. At the time of its purchase in 2003, only a small percentage of its massive square footage was occupied, leaving the bulk of the complex to deteriorate like similar Detroit manufacturing buildings have over time. With the continued support and maintenance by Dionysia Properties, the Russell has instead emerged as an influential center of creativity and entrepreneurship. An average of one new occupant per week joins the Russell creative community.

The industrial backdrop of the campus has also attracted many film productions. It has appeared on "Detroit 1-8-7," the 2010 MTV Video Music Awards, "Vanishing on 7th Street," "Hostel 3," and the Palladium Boots documentary "Detroit Lives." Multiple print and video advertisements were also shot at the Russell.