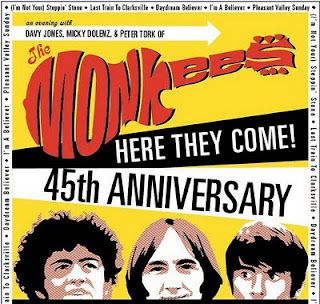 The Monkees 45th Anniversary Tour
Thursday, June 23, 2011
Fox Theater, Detroit
It's a little funny to me how they always bill this trio as "Original Members." Well, sure they are, but are markedly lacking in green wool hats. The highest-level tickets have already sold out in Detroit, but $23-$33-$53 are still available. Check here for yours.
The Monkees Celebrate Their 45th Anniversary by Hitting the Road for First Live Performances in a Decade

LOS ANGELES--(BUSINESS WIRE)--Hey, hey, it’s The Monkees! 45 years after their groundbreaking show and hit singles took televisions and record players by storm, Davy Jones, Micky Dolenz and Peter Tork are proud to announce a new tour to dazzle five decades’ worth of fans. An Evening with The Monkees - The 45th Anniversary Tour, the first live performances by the band in a full decade, launches on June 3rd and rolls through more than 30 cities before concluding July 15th.
Posted up by DC in Detroit on 8.3.11