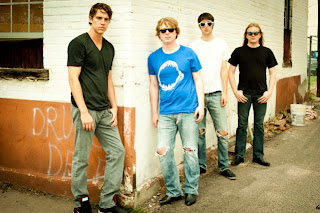 The Amends, the Colorado-based indie rock n roll band, is kicking off their very first tour by playing Hamtramck's New Dodge Lounge on Saturday, June 8th. . They will be playing with Detroit's own The Mystics (it's also their record release party), The Rushmores, and The Adrays. Ohio's Maid Myriad and Indy's own Pick Up Park. The first band (The Rushmores) go on at 10:45. The Amends will take the stage at 11:45. The cover is $5 for 21+, or $10 for 18-20.

The Amends willed themselves to life in the strange town of Boulder, Colorado in January of 2010. Hearing the first plaintive cries from their debut self-titled album prompted responses such as, "Holy sh-t, who are these guys?" (Gas Lantern Media) The Amends' classic rock riffs, bluesy grooves, and anthemic indie-rock melodies began to coalesce into a unified sound that felt both warmly familiar and brand new-- not to mention catchy as hell. The Amends began to grow-- stretching their legs and sharpening their teeth within the Denver indie scene throughout 2011 and 2012.

On the occasion of their third birthday, The Amends self-released their second album, which they titled What We Could Be, "the perfect title for this album, because the possibilities are endless and the results enjoyable... an album to play again and again"(Team Hellions). The band had begun to find their place, and their function-- which Pull The Plug distilled as, "this is an album that will make you want to dance, jump and take off your shirt." Some even took it a step further, by saying The Amends' music "makes us feel as though we could live forever"