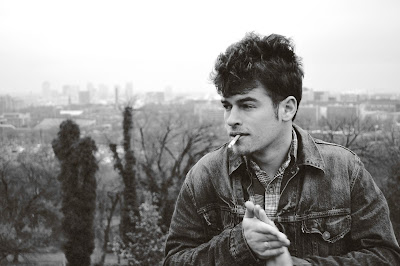 Send an email to motorcityblog@earthlink.net for your chance to win a pair of tickets

Welcome to the sound of Winston Yellen and Night Beds, who in one stunning ten-track debut album Country Sleep, have shown that there is plenty of life left in the world of American music if you have the voice, the songs and the gift to touch hearts and souls. Think of a space between Mark Kozelek (Red House Painters/Sun Kil Moon), Gram Parsons and the dreamier side of My Morning Jacket; a heavenly place of pure country soul, touched by an endearing innocence and honesty that can only come from someone still in their early twenties.


From Colorado Springs, and now a resident of Nashville where he first moved to study, Yellen's road to Country Sleep has been anything but the straightest and easiest. In 2006, he formed Night Beds and self-released three rudimentary EPs between 2008 and 2011.

Waylaid by what Yellen's friend Nika States recalls as, "a lot of alcohol, and a lot of irreverent tuning," he dropped out of college. After losing his job and girlfriend, and in the spirit of the country classic 'Me & Bobby McGee' - "freedom's just another word for nothing left to lose" - Yellen took off on a five-month sojourn. Moving from state to state, he lived out of his hatchback car performing menial odd jobs and mopping Church floors until, he says, "a friend instilled in me the need to cut the bullshit and move back to Nashville."

Taking out a loan, Yellen rented an out-of-town, pre-civil war home in the woods that was previously owned by the late Johnny Cash and June Carter (and still maintained by the couple's friends). Inspired by the serendipity of the discovery, he started working on Country Sleep, both in his country retreat and back in civilisation at Nashville's Brown Owl studio.

Night Beds was conceived in a place that is usually just the domain of dreams. As Winston Yellen explains, "the name is tongue in cheek, but a lot of the music was developed at night, from listening to, or writing in my bed." And it feels very nocturnal. Night Beds is a landscape, or an ethereal escape for the soul.

Country Sleep begins with just a voice, a high and tender lament, for 71 precious seconds; a spirit to be reckoned with. Next up, a full band kicks up some dust behind a deliciously bittersweet melody. After that, more beautiful crooning unfolds over a violin/guitar backdrop that keeps building until the pace momentarily quickens to the sound of handclaps before a sudden, heart-aching fade. The album concludes with "TENN", as in Tennessee, written the next day after the night before, hungover and lost. Yellen admits the songs were often born out of, "destructive circumstances, and many varied attempts to sedate myself."

Indeed, anyone listening to Country Sleep – whose title harks back to the 'night bed' in the back of his car – will also find the record a cathartic experience.

Backed by various musicans and a careful ear for arrangement, Winston Yellen and Night Beds are not here to simply sing you to sleep, but to soundtrack your hopes, fears and dreams.