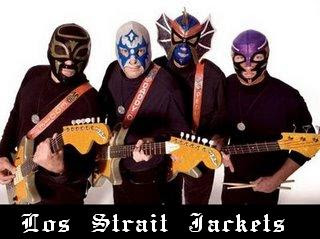 With the heroic efforts of Eddie Angel, Daddy-O Grande, Pedro Del Mar and Teen Beat, the world renowned kings of Chopsville are set to release one of their most remarkable albums to date. Los Straitjackets, being released on Yep Roc April 28, features 13 tracks of future vintage sounds straight from planet Straitjacket. With well over a decade of experience under their utility belts, the instrumental rockers 14th album finds the band in classic form.
Do not succumb to the evil temptations of mediocrity
and check out Los Straitjackets’ amazing journey
to save the world one riff at a time!

The Los Straitjackets have made a career out of being one of the most dynamic and skillful instrumental bands on the planet. Their renowned live show is filled with mind-bending guitar theatrics, group choreography and fuzzed-out experiments in high fidelity rock n’ roll showmanship. Over the years, Los Straitjackets have brought their high-energy shows everywhere: from Moscow to Milwaukee, Albany to Amsterdam and Boston to Barcelona. Their fan base boasts numerous celebrity admirers, including such notables as Robert Rodriguez, Quentin Tarentino, Jackson Browne, Rob Zombie and Tom Petty.
These masked guitar-slingers deliver top notch surf-rock
that would make Dick Dale proud!
Don’t miss your chance to see
“America’s Instrumentalists”
live and in person!

Get tickets here for the
May 23rd 2009 show at
The Crofoot Ballroom
Pontiac MI
added bonus feature
Los Straightjackets are playing this show
with another MCB favorite
Southern Culture on the Skids !!!

"MCB IS DETROIT"
Check out more MCB-VIDEOs here
Posted up by DIETROIT on 20.4.09