MCB has some freebies for this awesome flick
enter to win - motorcityblog@earthlink.net 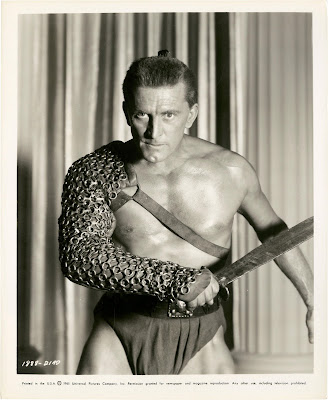 The Redford Theatre presents the epic film Spartacus (1960) on Friday, April 2 at 8 p.m. and Saturday, April 3 at 2 & 8 p.m. All tickets are general admission and cost $4 which includes free supervised parking. The Redford Theatre is located at the NE corner of Grand River Ave. and Lahser Rd. in the heart of Detroit’s Old Redford neighborhood.
The once deleted but now restored original overture and a flirtatious 5 minute sequence between Olivier and Curtis are included in this pristine 35mm film version. This movie is sponsored by Between the Lines-Michigan’s Weekly News for Lesbians, Gays, Bisexuals, Transgenders and Friends. Adding authenticity to this event Legion XXIV Roman Army reenactment Legionnaires and their entourage of slaves and Roman citizens will attend all three screenings to ensure order in the realm.
Based on a book by Howard Fast and a screenplay by Dalton Trumbo, Director Stanley Kubrick took on this film after Anthony Mann and Executive Producer and star Kirk Douglas clashed. This epic film dramatizes a true historical turning point as the Old Republic slips away into Empire. Thracian slave Spartacus (Kirk Douglas) escapes from owner Lentulus Bastiatus (Peter Ustinov) and with his compatriots (Jean Simmons, Tony Curtis, Woody Strode) lead a revolt which results in their deaths, some by crucifixion, at the hands of Crassus (Laurence Olivier). Spartacus is betrayed by Tigranes (Herbert Lom), a rogue Pirate leader. In the film Crassus is opposed by Gracchus (Charles Laughton) and Julius Caesar (John Gavin).
From the original theatre organ to the splendor of the Japanese Garden on a starry night, the all volunteer staff has carefully restored the theatre to its 1928 appearance. In an era when our Region seems in decline, the Redford Theatre is a shining point of light of wholesome family entertainment anchoring the Old Redford neighborhood, beckoning all who believe in the power of community to renew and restore.
Coming April 16 & 17: Three Stooges Film Festival with six Curly, Moe and Larry shorts from 1937, 1938 & 1939. Tickets for this popular Festival are $5. On April 30 and May 1 we screen Singin’ in the Rain with the cartoon Mr. Magoo Beats the Heat.
Tickets for this show are only $4
www.redfordtheatre.com
Sponsored by: Between the Lines