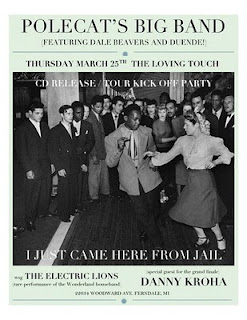 Dale Beavers has been teaching DUENDE! about the dark secrets of rock 'n' so much so they have worked up a program of music pulling from Dale's time with Junior Kimbrough, R.L. Burnside and Nathaniel Mayer among others as well as DUENDE!'s own love of Sonic-Americana under the guise of Polecat's Big Band.

This rowdy union of musicians is striking camp and saddling up for a long
weekend banging it out in New York but not before they build a campfire at the Loving Touch in Ferndale on Thursday March 25th with the Electric Lions playing a rare show outside of their house band stint as the Glass Orphans for Detroit's Wonderland and pass the whiskey around with Danny Kroha who will be picking and grinning his own urban tales round midnight.
Posted up by RebeccaMich on 23.3.10