On April 14, 1960, Motown Records was founded by Berry Gordy Jr. and quickly shot to fame as the most successful brand of soul/R&B music in the country. Gordy amassed an amazing collection of chart-topping artists including Martha and the Vandellas, Smokey Robinson and the Miracles, The Temptations, The Four Tops, Diana Ross and the Supremes, Gladys Knight and the Pips, The Jackson 5, Stevie Wonder and Marvin Gaye.

The "Motown Sound" has been celebrated in many movies including the five selected by TCM for this 50th anniversary tribute:

Thank God It's Friday (1978)
Wednesday, April 14,2010 8:00 PM
However it may have been kicked into production gear by the success of John Badham’s Saturday Night Fever (1977) and the vogue for disco-themed entertainment off the dance floor as well as on (a passing popular fancy whose perniciousness explains the short-lived ABC-TV sitcom Makin’ It), the Casablanca Filmworks release Thank God, It’s Friday (1978) is stylistically closer kin to Grand Hotel (1932) or International House (1933) for its crush of disparate and desperate characters convening for one night in a common setting where miscommunication, mischief and mishaps flourish. Made in partnership with Motown Records (which had previously backed the Diana Ross vehicles Lady Sings the Blues [1972], Mahogany [1975] and The Wiz [1978]), the film was a bid to get silver screen time for such clients as The Commodores and Donna Summer, whose seventeen-minute “Love to Love You, Baby” was an early disco smash. Summer’s audible approximation of sexual ecstasy within the context of the track earned her the nickname “The First Lady of Love.” 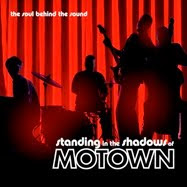 Standing in the Shadows of Motown (2002)
Wednesday, April 14,2010 10:00 PM
There is so much laughter and genuine affection between the subjects of Paul Justman’s Standing in the Shadows of Motown (2002) that it is very easy to forget the Academy Award® nominated documentary is meant to be a heartbreaker. Not a behind-the-scenes look at Berry Gordy, Jr.’s home-based Motor City hit factory per se, the film is rather a belated championing of the session musicians who backed such Sixties chart toppers as Stevie Wonder, The Supremes, Smokey Robinson and the Miracles, Marvin Gaye, the Four Tops, the Temptations, the Jackson 5, Martha and the Vandellas and Gladys Knight and the Pips (to name but a few frontrunners from Gordy’s stable of R&B thoroughbreds). The economic upturn following the Second World War led to an expansion of America’s automotive industry. In search of a better standard of living, many southern blacks migrated northward, with the car factories of Detroit a particular magnet for the southern Diaspora.

Lady Sings the Blues (1972)
Wednesday, April 14,2010 12:00 AM
The Motion Picture Academy® has a tradition of recognizing new talent in their midst during Oscar® season. In the organization's long history, it has often gone out of its way to honor Hollywood newcomers, from Marlene Dietrich -- nominated for her first U.S. film, Morocco (1930) -- to Marlee Matlin, who won for her big screen debut in Children of a Lesser God (1986). Rarely has the anticipation of a screen debut or the excitement over its success run as high as when Diana Ross stepped into the role of a lifetime as tortured jazz singer Billie Holiday in Lady Sings the Blues (1972). An Oscar® nomination for her seemed almost inevitable.

The Big Chill (1983)
Wednesday, April 14,2010 2:30 AM
When it was first released in 1983, The Big Chill drew decidedly mixed reactions despite its commercial success. Some saw it as an insightful portrait of a generation lost between youthful idealism and middle-aged disillusionment, while others found it glib and self-conscious. True, it doesn't always hold up well with today's younger audiences, who don't always relate to the time period and the dilemmas that are the film's focus. But it was nonetheless a box office hit and it garnered three Academy Award nominations - for Best Picture, Best Original Screenplay and Best Supporting Actress (Glenn Close) - and a Writers Guild of America Award for Best Comedy Written Directly for the Screen.

Norman...Is That You? (1976)
Wednesday, April 14,2010 4:30 AM
There's a Sexual Revolution Going On...And All the Leaders Are in My Family!
Tag line for Norman...Is That You?
With a title track by Smokey Robinson and closing song by Thelma Houston, Norman...Is That You? (1976) gave every indication of being Motown's take on the sexual revolution. What ultimately emerged, though, were a series of tired Borscht Belt gay jokes translated into black culture and a film that, though probably well intentioned, emerges as a collection of stereotypes that were already outdated by the mid-seventies. The one plus the film has going for it -- and it's a pretty big plus -- is a tour de force comic turn by star Redd Foxx.
Posted up by DC in Detroit on 30.3.10