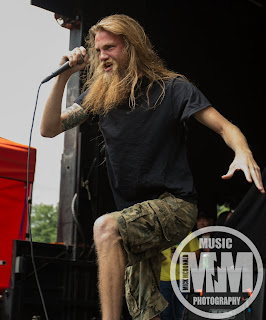 "Hoooooooooooooooooome!" bellowed Kyle "Gumby" Gunther, lead singer of Battlecross, as they took to the stage early in the day at the Rockstar Mayhem Festival this past Sunday at DTE Energy Music Theatre. Judging by the response and size of the crowd that had swelled to fill the parking lot of the festival stage area, it was a long overdue welcome home for Battlecross on this stop of the tour and they set the tone for the rest of the afternoon. Not even the smattering of rain with intermittent pelting downpours was going to drive the early crowds away from the Jagermeister stage as the native Michigan blue collar thrash metallers launched in to a ferocious and intense set twenty five minute set that stoked the ferocity of the pit in front of them to near maelstrom levels. If there were ever a mosh pit version of a high school homecoming, this was it, with family, friends and fans alike in attendance to show their support for this hard-working home grown band.

Rockstar Mayhem Day 21 - Clarkston, MI
That's not to say there weren't many other great bands on the bill on this years tour. Huntress kicked of the day with their own blend of metal fronted by the sexy black-caped clad vixen Jill Janus. Supergroup Attika7, with former Biohazard power growler Even Seinfeld greeting the crowd ripping on to the stage on his motorcycle, backed by former members of Metal Church, Nonpoint and Lizzy Borden, reinventing the roots of metal. Finnish melodic death metal masters Children of Bodom also appeared early in the day, along with Machine Head, Butcher Babies, Job For A Cowboy, Emmure and many others.

The big guns came sailing in to the main stage pavillion shortly before 6:20, with the Norse mythology inspired songs of Swedish melodeath band Amon Amarth. With a large Viking ship piercing out through the center of the stage, they had an impressive presence on the main stage, crushing the crowd with tales of conquest, plunder and revenge. They were followed up by the well received sludge rockers Mastodon, unique and inventive in their sound. Five Finger Death Punch brought probably the brightest and flashiest set to the stage with chromed out larger than life logos perched across brass knuckles with gargoyles perched around the stage. One of the most energetic performance of the night, they also had a brief interlude of "Ivan Says", with singer Ivan Moody bringing a select group of kids up on the stage for a round of fun.

Of course, the main attraction of the night was horror rock veteran Rob Zombie, who really needs no introduction to his over the top stage productions replete with walls of flame, smoke, and enough lights to power the city of Detroit and then some. A whirling, shadowy figure of dreads and ghastly makeup, Zombie is always on top of his game when he brings his rock and roll nightmare to town. Pedal to the metal, he packed enough energy and showmanship into his hour plus set that kept the crowd rocking long after the lights went down and they dispersed in to the chilly misty night air in to the parking lot.

MOTORCITYBLOG guest contributor Carl Boone did some interviews backstage for us during the festival. Unfortunately some of the other audio files we had with Huntress, Emmure and City of the Sea were corrupted during the backup transfer process, but we were able to salvage the following interviews.

The Rockstar Energy Drink Mayhem festival is always a celebration of all things metal and this years lineup did not disappoint. The tour wraps up August 4th in Dallas, TX with stops in Atlanta GA, Tampa FL, Austin TX, and The Woodlands TX over the next week before that. Get out and catch it if you can!